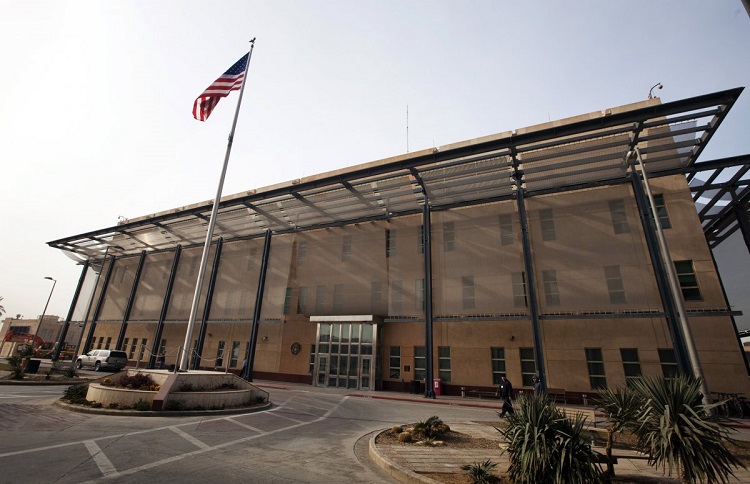 Iran’s state-run Keyhan daily, which is known as the Iranian government’s mouthpiece, called yesterday for the United States Embassy in Baghdad to be taken over.

Editor Hossein Shariatmadari wrote: “Why [are] the Iraqi revolutionary youths … not ending the presence of US embassy in Baghdad, which is the epicenter of conspiracy and espionage against the innocent people of Iraq!? And why are you not eliminating and throwing out this infected wound from your holy land? The takeover of the US espionage center in Islamic Iran and eliminating that epicenter of conspiracy had many benefits for us, and then why have the revolutionary youths of Iraq deprived their holy land of these benefits?”

Now, to answer this, you’d have to look at the demands of the demonstrators in Iraq, which is the eviction of the Iranian regime and its proxy terrorist militias from their country. How then can the Regime claim that the problem in the US?

Shariatmadari talks about the 1979 takeover of the US embassy in Iran, failing to note that this was done because the government needed a major crisis to eliminate democratic forces in Iran, so they took over the embassy and took 52 embassy personnel hostage for 444 days. The reality is that Iran needs this again because the protests threaten its regional influence at a time when domestic protests are rising. The regime is seeking again to destroy democracy.

Iraqi security analyst Hisham al-Hashimi said: “Iran is afraid of these demonstrations because it has made the most gains in the government and parliament through parties close to it. Iran does not want to lose these gains. So it has tried to work through its parties to contain the protests in a very Iranian way.”

One Iraqi protester Ali al-Araqi, who saw violent clashes between protesters and security forces, said: “All the parties and factions are corrupt, and this is connected to Iran because it’s using them to try to export its system of clerical rule to Iraq. The people are against this, and that is why you are seeing an uprising against Iran.”

Iraq has seen the burning of government buildings and Iranian flags with people chanting: “Iran, out, out!”, despite the violent crackdown that included being shot by masked men who appeared to be linked to Iraq’s security forces. This includes a young Iraqi woman, Noor Marwan, who was killed Monday when tear gas canisters hit her in the head.

Khamenei’s suggestion about taking over the US embassy in Baghdad threatens the US and Western governments over supporting the Iraqi people’s uprising rather than the Iran-backed Adel Abdul Mehdi government, but the West should not turn a blind eye to Iran’s crimes in Iraq.