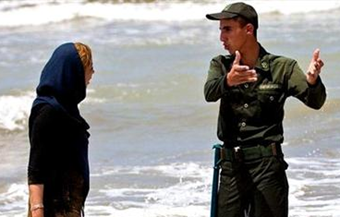 “The addition of 7,000 forces dedicated to the suppression of women and further gender discrimination speaks well of the reality that Hassan Rouhani is no different from the other mullahs and the hopes for an improvement of women’s rights in Iran which some had advocated at the start of Rouhani’s tenure as President are a mirage”, said Farideh Karimi of the National Council of Resistance of Iran (NCRI), according to the International Business Times.

Rouhani distanced himself from the increase in morality police who are officially under the jurisdiction of Supreme Leader Ayatollah Ali Khamenei by saying it was beyond Presidential control.

“Our first duty is to respect people’s dignity and personality. God has bestowed dignity to all human beings and this dignity precedes religion”, Rouhani said.

However Karimi disagreed that the government was powerless and called the improvement of women’s rights in Iran a “mirage”:

“According to the regime’s laws, Rouhani has the authority to halt the new suppressive measures against women. By refusing to do so, he is in practice endorsing them”, she said.

Karimi also drew attention to Rouhani’s past statements and actions against women’s rights that showed clear, historical opposition on his part.

“Immediately after the 1979 revolution when he was Chief Supervisor of the Offices and Institutions affiliated to the Iranian Armed Forces he personally issued a directive banning any women who refused to wear the veil from working or even entering into the army offices.

“He brazenly said that at the time he had hoped to lead the way in encouraging other Iranian Ministries to impose similar measures against women. With such a track record, who can really believe that Rouhani in any way respects the rights of Iranian women including the right to freely choose their attire?”

Iran’s position towards women has been the subject of discussion around the world as female staff of Air France flying on the newly re-opened routes to Tehran were given the opportunity to switch flights.

The 7,000 morality police will target women deemed to be improperly veiling and report them to law enforcement. Wearing make-up is an imprisonable offence. Girls as young as 12 have been policed. Property, including vehicles, can be impounded for weeks, and arrests have been made in Tehran’s popular squares.

According to Brigadier General Seymour Hosseini associated with the morality police more than  40,000 cases of “bad hijab” were reported during the last eight months of 2015. Police Spokesman Saeed Montazer al-Mahdi said that during the Persian year ending in March 2014 over three million women were warned, made to write pledges or referred to the justice system.

Iranian chocolate thief ‘to have hand chopped off’

AFP: An Iranian court has condemned a man convicted...