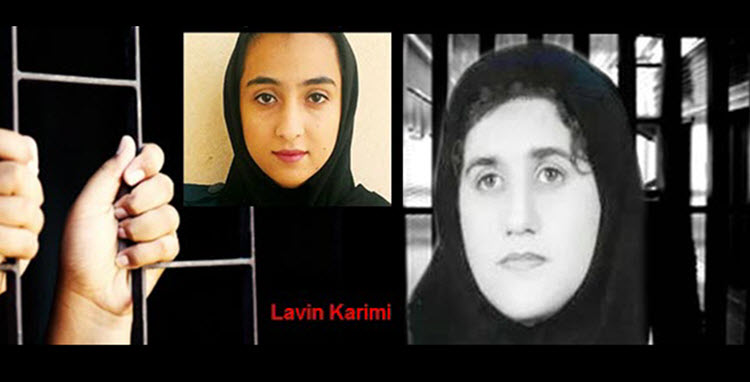 London, 8 November – According to reports received by the National Council of Resistance of Iran (NCRI), and published by them on November 7, political prisoner Lavin Karimi in Hamedan prison has been denied medical treatment for stomach problems she incurred during torture while under interrogation.

She is now experiencing bleeding in her stomach, and prison doctors say that she must receive medical treatment immediately. However one of her torturers, a man called Rajabi, told Lavin that the Intelligence Ministry will not allow her out of prison, and the prison can do nothing to help her.

Lavin Karim, 26, is a university student. She was arrested on August 15, 2015 in her father’s home in the city of Saghez (Northwest Iran), and sentenced to five and half years in prison. Following objection by her lawyer, the verdict was reduced by the appeals court to three years imprisonment, and exile to Hamadan prison.

On November 4 the NCRI received further reports, and in an article published on November 7, also says that the political prisoner, Afsaneh Bayazidid, a Kurdish student held in exile at Kerman Prison, has now been placed in solitary confinement after allegedly, ‘starting a fight with other prisoners’.

The student from Bukan was sentenced on August 21, 2016 to four years’ imprisonment, as well as exile to Kerman Prison, on charges of propaganda against the system, insulting Khamenei, and working with a Kurdish party. Afsaneh Bayazidi denied all charges.  She was taken to Kerman Prison on September 8 to serve her sentence.

In an interview, Afsaneh’s mother said that, “Afsaneh has been deprived of making any phone calls to us during the two months she’s been held in Kerman Prison.” However, in the one phone call she was allowed, Afsaneh said “they’ve put me next to dangerous prisoners which has taken away my safety and comfort and I keep having nightmares about death every night I go to bed, wondering if I’d still be alive to wake up in the morning. They call me all the time and tell me ‘hey, you counter-revolutionary Kurd, are you still alive?’”

“My daughter is serving her sentence in terror”, said Afsaneh’s mother, who added, “I need to be on the bus for 20 hours to travel from Bukan to Kerman and see my daughter which I’ve done only once as I’m old now and not able to do such things anymore. I wish she was transferred to Bukan.”

On April 24 this year, the criminal security forces entered Afsaneh Bayazidi’s house in Bukan without showing a warrant. Following an inspection of her house and seizure of some of her belongings, they arrested Afsaneh.

The Hill: Suppose they held an election and nobody...