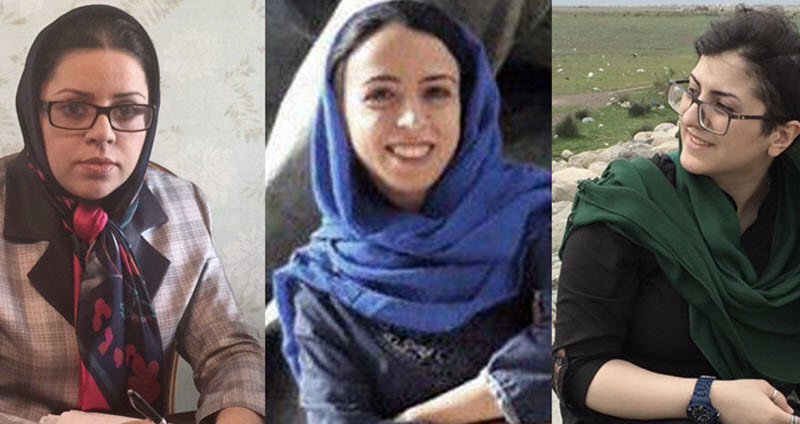 London, 6 Oct – When Iranian security agents arrested women’s rights advocate Maryam Azad at Tehran’s Khomeini Airport on September 25, she became the fourth activist to be arrested in a month.

Azad, 31, a theatre graduate, had boarded a plane to Istanbul when she was arrested and it is not yet clear what she is being charged with. She also requires medical care for an unknown ailment, but the Iranian Regime often denies medical care to prisoners.

The Intelligence Corps of the Revolutionary Guards (IRGC) have already arrested activists Hoda Amid, a lawyer, and Najmeh Vahedi, a sociologist, and Rezvaneh Mohammadi, a gender studies student, all at their separate homes at the beginning of the month. The charges against those three have also not been revealed and none of them has had access to a lawyer, leading us to believe that they are being held on political grounds.

Mohammadi was previously arrested by the “Morality Patrol” for not wearing the hijab, but was released on bail the next morning.

Amid, a member of the Bar Association and an activist for gender equality, has often represented female clients pro bono and has campaigned to end gender-based discrimination, while all three women ran workshops on equal marriage rights and other women’s rights.

A source told the Center for Human Rights in Iran (CHRI): “Amid and Vahedi did not have any mutual activities other than this educational workshop, which was organized with a legal permit, so there was no excuse to detain them.”

Vahedi’s mother was allowed to visit her daughter in prison on September 18, two and a half weeks after her arrest, but the families of Amid and Mohammadi have not been allowed to visit them.

In the past few days, many Iranians have condemned the arrests of these women via Twitter, especially during the UN General Assembly, and the CHRI has called for their immediate release.

Arrests and overall persecution on women’s rights activists have intensified significantly over the past few months, with human rights lawyer Nasrin Sotoudeh and civil rights activist Dr. Farhad Meysami, both arrested for opposing the mandatory hijab and supping the Revolution Women protests.

Both are now on hunger strike, with Meysami refusing liquids or being fed intravenously, so their families are very worried about them. Prison authorities are now keeping Meysami in solitary confinement and moved him to the hospital ward to be fed intravenously without his consent.

Reuters: The U.N. secretary-general and the U.S. government condemned...