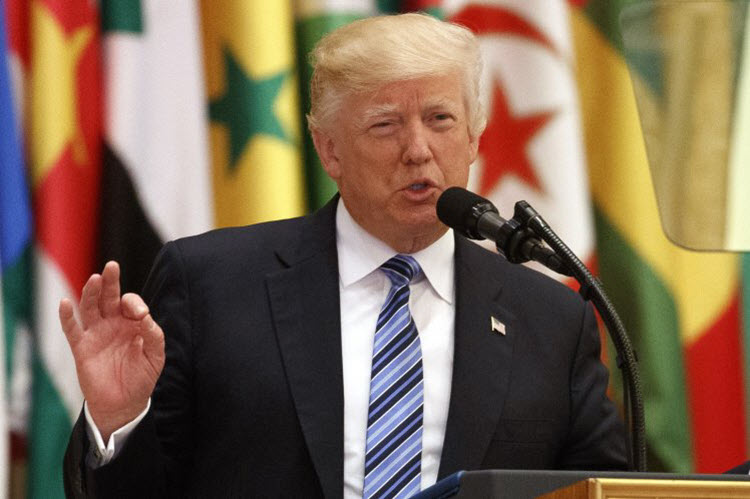 London, 22 May – Donald Trump used his first keynote speech abroad to criticise the Iranian Regime for supporting the Syrian dictator, Bashar al-Assad, in his crimes against his own people and for Iran’s support for terrorism.

While addressing the leaders of Arab and Muslim-majority nations at the Arab Islamic American Summit in Riyadh, Saudi Arabia, he said: “There is a regime that is responsible for so much instability in the region. I am speaking, of course, of Iran. From Lebanon, to Iraq, to Yemen, Iran funds arms and trains terrorists and other extremist groups.”

He continued: “For decades Iran has fuelled the fires of sectarian conflicts. Among Iran’s most tragic and destabilising interventions, you’ve seen it in Syria – bolstered by Iran, Assad has committed unspeakable crimes.”

He said that “responsible” nations must work together to end the humanitarian crisis in Syria and restore stability to the Middle East as soon as possible.

He also advised that Middle Eastern countries should share the majority of the responsibility for eradicating Islamic terrorism, rather than waiting on the US to help. However, this is slightly misguided because terrorism affects all countries in the world and everyone should be working against it equally.

Trump did, however, stress the important of cooperation between the US and its Middle Eastern allies, whom he referred to as “friends”.

Most of Trump’s comments were well received by the summit and his Saudi hosts, who are at odds with Iran because of their destabilising influence in the Middle East. Saudi Arabia and Iran are on opposite sides of the civil wars in Syria, Iraq, and Yemen.

He said: “In its prosperous times, Islam provided the best example of religion and tolerance. One of the most important goals of our Islamic Sharia is to protect life – and there is no honour in committing murder. Islam is the religion of peace and tolerance – it considers killing an innocent soul tantamount to killing all of humanity.”

During Trump’s speech, he also praised the Middle East and the religion of Islam, a stark contrast to his previous call for Muslims to be banned from entering the US.

Trump was accompanied on this trip by wife Melania, daughter Ivanka, who is the special assistant to the President, and son-in-law Jared Kushner, who was put in charge of brokering peace in the Middle East.

Pentagon plays down remarks by Panetta on Iran

AFP: The Pentagon on Tuesday sought to play down...