The Women of the Iranian Parliament Are Advocates of Misogynist Laws 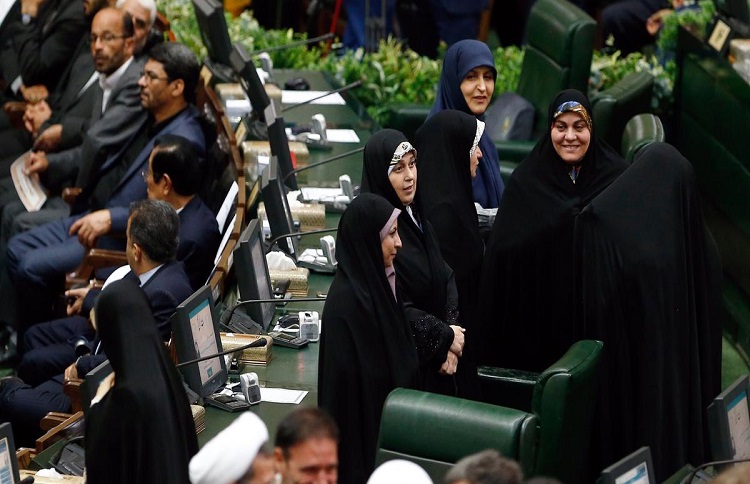 There are 16 female members of Iranian parliament now, (5.7% of the parliament) all of whom, along with the 260 male MPs, are loyalists to a misogynist regime.

So, who are these women who betray Iranian women in order to be a stooge for supreme leader Ali Khamenei? And how can we use what we know about them to predict the parliament’s future, especially over women’s rights?

Nine of them (55% of all female MPs) come from Khamenei’s fundamentalist faction, but perhaps more interesting are the four who declare themselves as “independent” but are loyal to the regime’s fundamentalism and terrorism.

Massoumeh Pashaii is the daughter of IRGC Brigadier General Hossein Pashaii, who was killed in January alongside noted terrorist and Khamenei’s right-hand man Qassem Soleimani by a US drone strike in Iraq. While Somayyeh Mahmoudi is the daughter of Gholamreza Mahmoudi and Acting Commander of an IRGC Brigade who was killed during the Iran-Iraq War. Both of them had hard-line military fathers, so it would not be surprising if they were hard-line and support of the regime’s warmongering as well.

Elham Azad’s action after taking her seat in parliament was to follow up on the enforcement of Khamenei’s misogynistic policies, stating some that had been announced but never implement in practice. One of these announcements, dating from 2013 and in response to the high levels of unemployment among women with higher education was Khamenei saying that women’s most important roles were housekeeping and childbearing

Zohreh Sadat Lajevardi is the daughter of Assadollah Lajevardi. Her case is particularly interesting because her father was Tehran’s Revolutionary Prosecutor in the 1980s and thus in charge of the torture and execution of thousands of political prisoners, including the rape of several thousand women and girls before their execution, conducted under a fatwa by regime founder Ruhollah Khomeini. There is actually evidence that Lajevardi personally raped many prisoners and had various brutal physical and psychological torture methods for female political prisoners.

Less than a month ago, Lajevardi said that it was impossible to define a set age for marriage because girls developmentally and physically at different rates, before dismissing the issue entirely saying that it was not something women were particularly concerned about. This is clearly disturbing and sets the stage for more relaxation on the rules of child marriage, which currently allow nine-year-old girls to be married off to men twice or three times their age.

Of the total seats in the parliament, 207 of them were allocated to the fundamentalist faction of Khamenei during the rigged election in February, but that’s not to say that those in the so-called reformist faction of President Hassan Rouhani are any better. In fact, all candidates for parliamentary elections need to prove devotion and adherence to Khamenei in order to be allowed to run. None of them could be considered independent. None of thems could be considered champions of women’s rights. Nor will any Iranian politician until the mullahs are gone.

Why Iran Reopens Schools Despite the Coronavirus Risk?

By Pooya Stone On September 5, schools were officially reopened...