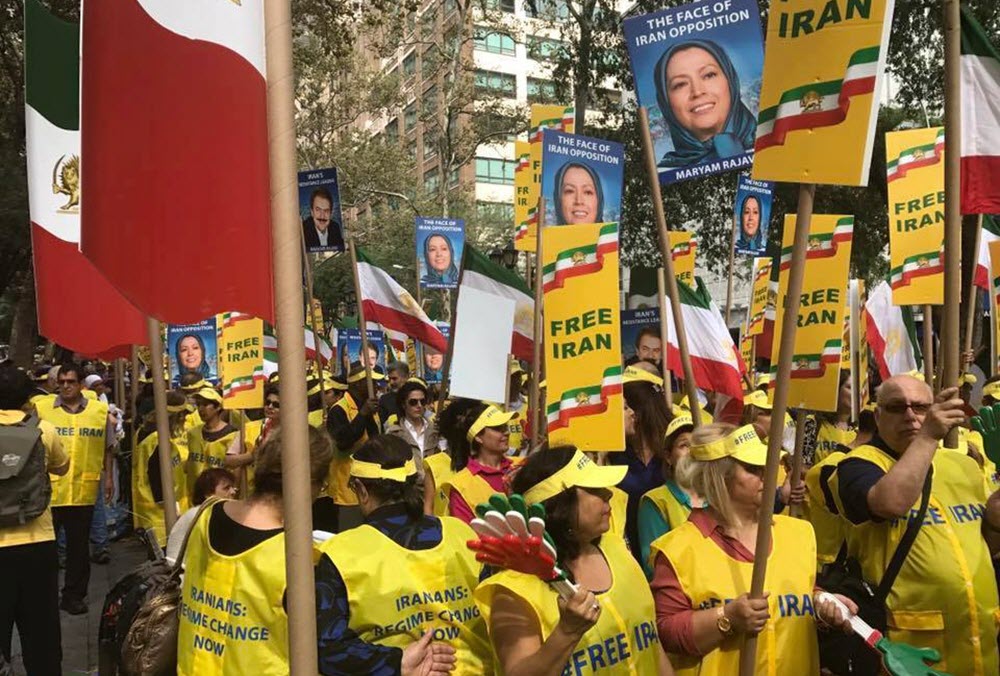 As Iranian President Hassan Rouhani addressed the United Nations General Assembly on Wednesday, thousands of activists and human rights defenders gathered outside to protest the legitimization of the Iranian Regime and call for regime change.

They dressed up in caricature-esque costumes of Rouhani and Iran’s Supreme Leader Ali Khamenei, chanted “Rouhani. No, no, no” and “Free, Free Iran”, and gave out literature to document the Regime’s crimes.

Sonia Samsami, the US Representative of the National Council of Resistance to Iran (NCRI), said: “We want the American people to know that the Iranian people do not want a clerical regime. Regime change at the hands of the people is the only solution to the Iran crisis.”

The NCRI, which comprises of over 500 Iranian opposition groups and individuals, have outlined a ten-point plan for the future of Iran which includes democracy, gender equality, a secular government, and the full abandonment of nuclear weapons.

Maryam Rajavi, the president-elect of the NCRI, said: “In the Iran of tomorrow, we will respect all individual freedoms. We underscore complete freedom of expression and the media and unconditional access by all to the Internet.”

Rouhani’s speech to the UN promised almost exactly the opposite, swearing that would react “decisively and resolutely” if the US rescinds on the 2015 nuclear deal.

This came a day after Donald Trump addressed the UN and signalled that he may indeed tear up the deal.

He said: “The Iranian government masks a corrupt dictatorship behind the false guise of a democracy. It has turned a wealthy country with a rich history and culture into an economically depleted rogue state whose chief exports are violence, bloodshed and chaos.”

The NCRI wants the US to support the Iranian Resistance, rather than continue the appeasement of the mullahs, and for the UN to investigate the 1988 massacre in which 30,000 political prisoners were murdered by people who still hold high-ranking positions in the UN.

Although investigation efforts have been routinely blocked by the mullahs, an audio tape leaked last year showed the Regime’s then-deputy to the supreme leader, Hossein Ali Montazeri, condemning the massacre as “greatest crime committed during the Islamic Republic” in 1988.

Samsami said: “For decades, the clerical regime deliberately pursued a policy of silence and it was a red line to talk about the massacre. The regime’s officials, perpetrators of the 1988 massacre, must be held to account and tried under international law.”

During the protest, many Iranian actors put on a silent play to depict the horrors of the massacre. In it peaceful protesters murdered by security forces and when their families turn up asking questions, they are attacked as well.

Many who are unfamiliar with the Iranian Regime consider Rouhani to be a “moderate”, but that is simply untrue.

• Export terrorists into Iraq and Syria to aid the destabilisation of the country, and prop up a dictatorship respectively

The Regime should not be endorsed by the UN but investigated by them.

Iran ‘to retaliate if attacked from US bases in Gulf’

AFP: Iran warned on Sunday that it would strike...

The Economist: Iran carries on enriching uranium regardless at...