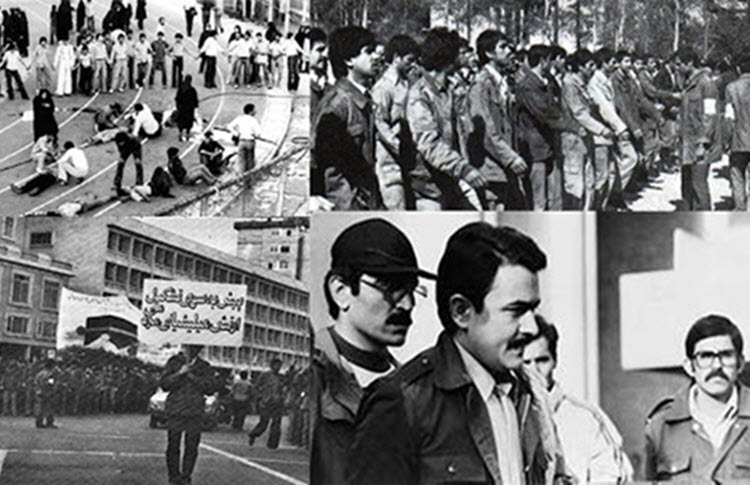 The mullahs’ regime became increasingly like a dictatorship following the rigged elections of 1980, when the mullahs stole power from the Iranian people and their democratic resistance forces the People’s Mujahedin of Iran (PMOI/MEK).

In June, five months after the election, the mullahs closed down the universities under the auspices of a “cultural revolution”, but in reality, Supreme Leader Ayatollah Ali Khamenei wanted to suppress a group that was more likely to rebel against the mullahs.

Shortly after this, the MEK called a demonstration against the mullahs’ malign behaviour at Amjadiyeh Stadium in Tehran on June 12, which attracted more than 200,000 people.

At the rally, MEK leader Massoud Rajavi addressed the dangers of the mullahs’ rising dictatorship and called on the MEK supporters to defend the freedoms that had been fought for in the 1979 revolution including freedom of speech, associations, and gatherings.

He also declared that the mullahs would not intimidate the MEK. He said: “We’re not afraid of bullets. If freedom means death, then we will die.”

The Regime, determined to break the rally up, sent Hezbollah thugs to try and break int the stadium and attack the MEK as they had during the election campaign. However, MEK supporters gathered outside stopped Hezbollah in their tracks.

In response, Hezbollah attacked the MEK, throwing stones and bricks. The Regime’s police officers and the Islamic Revolutionary Guards Corps (IRGC) were stood nearby but did nothing to stop the violence until they too turned on the MEK, and fired teargas at them and automatic weapons into the air.

Despite all this, Massoud Rajavi continued to address the crowds through explosions, machine-gun bursts, and ambulance horns. He ever addressed Hezbollah directly, hoping to put an end to the violence.

He said: “Do you hear? ‘We are neither Communists nor pro-Soviets as you claim. We are fighting for the total freedom and independence of Iran…. Freedom is not granted. It is won. A gift of the Lord, it is as indispensable as oxygen.”

The violence did not stop and as MEK members left the stadium, they were set upon by Hezbollah thugs or shot by the Regime’s security forces. Five MEK members died that night and hundreds were injured because of the Regime’s violence.

In the aftermath, the Iranian people increasingly moved away from the Regime and towards the MEK and it got to the point that Khomeini openly admitted that the end of the Regime was near on June 17.

He said: “Never have I so much feared seeing the Islamic Revolution end in failure.”

Unfortunately, that did not come to pass and five weeks later, Khomeini declared in a radio broadcast that the MEK was the Regime’s number one enemy, ahead of the United States, the Soviet Union, and Kurdistan.

On July 25, Khomeini said: “The Monafeqin [meaning hypocrites, his pejorative term for the Mojahedin] are worse than infidels. They say they are Muslims, but they act against Islam….Today, we clergymen are being called reactionaries…and those people [PMOI] are being called the intellectuals.”

This gave Hezbollah and the IRGC the go-ahead to further attack the MEK, and the MEK had to shut down 30 of its offices in order to save innocent lives.

Later that summer, the mullahs banned all political demonstrations.