France, the UK, and Germany Can Accept Trump’s Conditions, or Kill the Iran Nuclear Deal 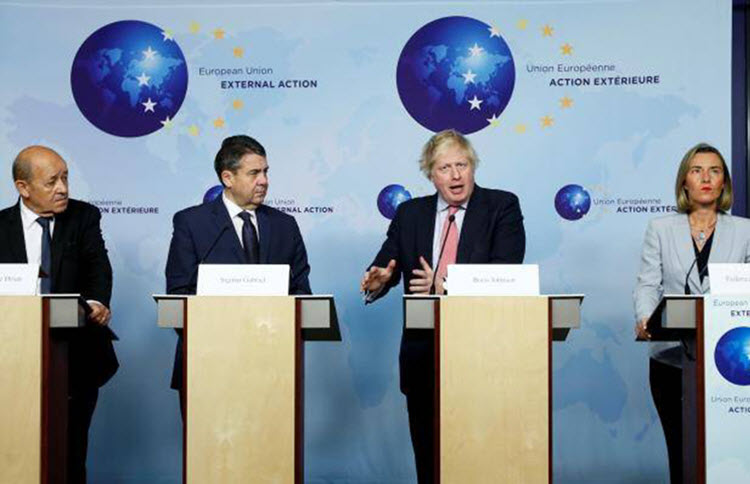 London, 04 Apr – With the appointment of John Bolton as White House National Security Adviser — the ascension of a “hawk” — the nuclear deal, also known as the Joint Comprehensive Plan of Action (JCPOA), between Iran and world powers appears likely to end. Europe may determine whether the deal survives if US President Trump is prepared to accept a real fix, and if negotiations offer one.

Trump laid out three conditions that the Europeans must meet if the U.S. is to remain in the nuclear deal last January. If the Europeans do not agree to these demands by May 12th, he will impose powerful economic sanctions against the Islamic Republic. These demands include:

Along with the US, France, the UK, and Germany negotiated the 2015 deal, as well as Iran, China and Russia. Beijing and Moscow don’t appear interested in a fix. However, the Europeans are massively invested in the US as well as critical business partners for the Iranians. Europe has economic leverage over Tehran.

European and American negotiators have discussed how and when economic sanctions would be reimposed if Iran violates key red lines. They are also defining illegitimate commerce with the Islamic Republic. Discussions are focusing on companies with ties to parties that control Iran’s economy, including the supreme leader, the Islamic Revolutionary Guard Corps and the clerical establishment, as well as state and military companies. Sanctions that specifically target the Revolutionary Guards are being studied, as well as those against Hezbollah. Also on the table are measures against Iranian cyber warfare and interference with maritime shipping.

European negotiators seem flexible regarding Iran’s long-range missiles and military-site inspections. However, Germany has been particularly intransigent about the sunset provisions, as well Washington’s call for Europe to designate Hezbollah’s military and political wings as a terrorist organization. This is surprising, as Hezbollah has engaged in terrorism on European soil.

France, the U.K. and Germany also have refused to designate the Revolutionary Guards a terrorist organization. They have resisted deploying the most powerful sanctions proposed to target Iran’s missile program. Tehran’s missiles threaten not only U.S. forces in the Middle East, but America’s closest regional allies, as well.

France, the UK, and Germany are concerned that concessions to Washington will cause Iran to walk away, and lead to a nuclear crisis. They now also face the challenge of Trump walking away.

The Europeans’ dislike for Trump is profound, but if they don’t act, Bolton will ensure that the US president walks away in May. If Trump rejects a well-negotiated agreement, the Europeans will have acted in good faith. Still, if they don’t strike an accord with Washington, they will own the consequences that follow, at least in part.