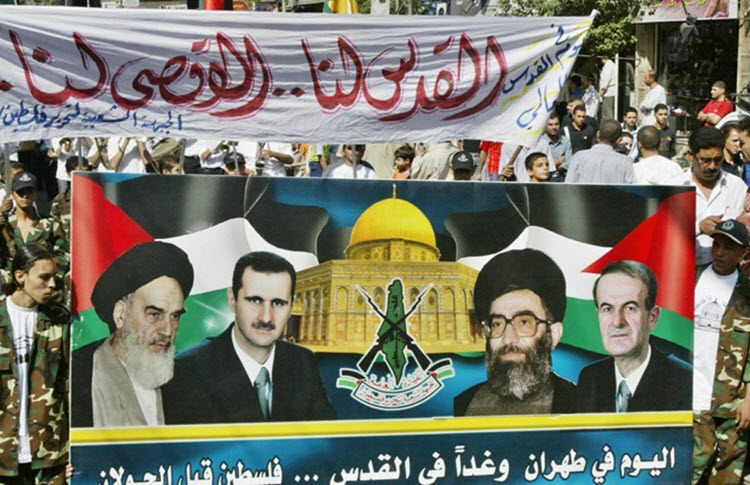 On Sunday, the New York Times published an editorial by Thomas Friedman in which he argued that, of all the global conflicts and competing interests currently converging in Syria, the most dangerous is the escalating clash between Iran and Israel.

Syria is widely seen as being at the heart of Iran’s expansionist agenda in the surrounding region, and Israel has declared that it will not allow the Islamic Republic to develop a permanent foothold there for either its own military or its militant proxy groups, particularly Hezbollah.

Friedman warned that the shooting war between Israel and Iran may be poised to enter “round two” and to become uncontained. The first round began in February when an apparent incursion into Israeli airspace by an Iranian drone led to a series of events in which several Iranian targets in Syria were bombed, and one Israeli aircraft was shot down. The pilot in that incident survived, but an uncertain number of Iranians were killed.

At the arguable opening of “round two,” the reported number of casualties was more definitive. On April 9, Israel apparently launched a strike on the T4 airfield in Syria, a point of origin for Iranian-made drones. In line with standard policy, Israel neither confirmed nor denied its responsibility for the attack, but allies of the Jewish state appeared to acknowledge that Israel was responsible. So did Iranian officials, who also broke with their standard policy by using state media to report on the death of seven members of the Quds Force, rather than downplaying the effects of the strike.

As Reuters noted on Tuesday, the Iranian response to that incident also entailed the promise of reprisals, although Tehran was not specific about what form this reprisals might take. In turn, Israel released new details about what it described as an Iranian air force operating out of Syria. In this way, the Israelis appeared to be hinting at the types of targets that might be in the crosshairs in the event that the conflict between Israel and Iran does enter a new and less contained phase.

To some observers, such a development may appear all but inevitable. This is certainly one way of interpreting the observations published on Monday in a piece by Karim Sadjadpour in The Atlantic. Sadjadpour argues that the primary motivation for Iran’s unflinching support of the Assad regime in Syria is, “a visceral and seemingly inextinguishable hatred for the state of Israel.” He also notes that this motivation is so strong that it apparently overrides other considerations like Iran’s financial future. The Islamic Republic is estimated to spend several billion dollars per year on its interventions in Syria, and the impact of this waste on the Iranian public helped to fuel mass protests in December and January.

As a consequence of this investment, it has been suggested that Qassemi Suleimani is effectively in charge of Syria. Suleimani is the commander of the Quds Force, the foreign special operations wing of the Iranian Revolutionary Guard Corps. The name “Quds” refers to the Persian word for Jerusalem and thus highlights the organization’s ultimate goal of destroying the Jewish state and “liberating” the Holy Land – a project that Iranian Supreme Leader Ali Khamenei has recently predicted would be realized within 25 years.

Iran’s well-established anti-Western rhetoric, together with Sadjadpour’s account of Iranian motivations in Syria, lends credence to the claims that were recently made by the Israeli Defense Force regarding the February drone incursion and subsequent bombings. The IDF now insists that the Iranian drone was not merely a surveillance drone, as initially reported, but was armed with explosives and dispatched on a mission to raid targets inside Israeli territory. If true, this would make the incident the first known attempt by the Islamic Republic to attack Israel directly, rather than through a terrorist proxy like Hezbollah. And as Friedman noted in his Times piece, it would also help to explain the decision by Israel to destroy Iran’s drone base in Syria last week.

Whatever the rationale for that attack, there is significant diversity among the voices that agree about that attack’s potential consequences. Just as Friedman described it as “round two,” the Washington Post quoted Hezbollah leader Hassan Nasrallah as saying that Israel and Iran had entered a new phase of “direct confrontation.” And on Tuesday, the Daily Mail made it clear that Israel was taking seriously Iran’s threats of retaliation, and was accordingly making preparations for some Iranian effort to get revenge for the seven dead members of the Quds Force.

But the Iranians would likely not be satisfied with a direct and isolated instance of revenge. Instead, Iranian political and military figures continue to issue broad threats to the Jewish state, including threats to its very existence. Iran’s Mehr News Agency carried remarks by Brigadier General Kiumars Heidari on Monday, in which he boasted of major increases in the capability of the Iranian armed forces and declared that “the date has been set” for Israel’s annihilation.

Heidari, the commander of Iranian ground forces, also extended his rhetoric to Iran’s other regional adversaries, taunting the likes of Saudi Arabia for their reliance on the US and other foreign allies as sources of military advancement. Wednesday marks Iran’s Army Day, which is traditionally celebrated with military parades and displays of supposedly new, domestically produced military technology. However, many of these supposed advancements have been dismissed by experts as non-working mock-ups or antiquated military technology dressed up with new paint and assorted decorations or modifications.

Nonetheless, and particularly in the wake of the 2016 implementation of the nuclear agreement between Iran and six world powers, Tehran’s militarist rhetoric has included declarations of readiness for war with more highly equipped militaries, including that of the United States itself. Such boasting is not generally taken seriously, and yet many of Iran’s adversaries are increasingly anxious about the expansion in Iran’s regional influence, which bolsters its prospects for asymmetrical warfare, including the use of foreign terrorist groups and proxies.

Under those circumstances, not only is the conflict between Iran and Israel noticeably escalating, but so too is the war of words between Iran and the Gulf Arab states, which threatens to turn into open conflict as well. Already, Iran and Saudi Arabia are waging a devastating proxy war in Yemen as they jockey for the upper hand in regional influence and prestige. All of this contributes to what Al Jazeera called a “geopolitical chasm” between the two countries in a report on Monday.

The report traced the history of diplomatic relations between the regional adversaries, and it noted that while they have succeeded at various times in resolving disputes through dialogue, this pattern is unlikely to reemerge any time soon. Al Jazeera quoted Iran scholar Mahjoob Zweiri as saying that the Saudis presently consider it important to depict Iran as “isolated, marginalized and facing pressure.” The recent Israeli strikes will no doubt help in that regard, especially in light of the various reports that Israel and Saudi Arabia, once bitter enemies, are showing more and more signs of willingness to cooperate in confronting the mutual threat from Iran.

Meanwhile, the Saudis and their allies can be expected to put forth effort toward countering the Iranian propaganda that has emerged from those strikes, regarding Iran’s readiness for war and its preparations for destroying the state of Israel.

Toward that end, Saudi officials used an Arab League summit on Sunday to once again push for unified action among member states in countering Iranian influence and undermining Iranian power.

In reporting upon this, the Associated Press noted that the persistent tension between Saudi Arabia and Qatar was on prominent display during that event, stemming from the decision last year by Saudi Arabia and three other Arab states to cut off ties with the small Saudi neighbor and to punish it for allegedly supporting terrorist groups and sympathizing with Iran. That diplomatic conflict underscores a point made by Al Jazeera regarding current Iranian-Saudi relations, namely that the Saudis view any acquiescence whatsoever as acknowledgment of Iran’s status as an imperial power.

The Al Jazeera piece also suggests that Arab resistance to this “acquiescence” would only be emboldened by the prospective American withdrawal from the nuclear agreement, or Joint Comprehensive Plan of Action. The probability of that withdrawal arguably increased on Tuesday, when the AP reported that the European Union had once again declined to impose new sanctions on Iran while reiterating its commitment to upholding the JCPOA.

The White House must renew sanctions waivers under that agreement by May 12, but President Donald Trump has declared that he will not do so unless the European signatories to the deal secure a plan for fixing the perceived flaws and omissions in the agreement. Specifically, Trump has demanded an expansion in international monitoring of Iran’s nuclear activities, an end to sunset provisions that allow for the expiration of limits on those activities, the imposition of new limits on Iranian ballistic missile activities, and the confrontation of Iran’s regional interference.

The latest reports indicate that the UK, France, and Germany have made progress toward an agreement with the EU over missiles and inspections, but not over sunset provisions. French President Emmanuel Macron and German Chancellor Angela Merkel are poised to travel separately to the US to urge Trump to keep the US in the deal. But these heads of state have also been increasingly critical of Iran’s regional role, and France participated in the US-led strikes on Syria last week.

This suggests that regardless of the future of the JCPOA, the US may find European backing for regional policies that confront Iran in Syria and elsewhere. An editorial published by Fox News on Monday suggested that such policies should specifically encourage Iran’s Arab adversaries to “keep Iran busy having to deal with its own problems.” With potential buy-in from both Israel and Europe, such a collaborative policy further underscores the growing unity among opponents of Iran’s imperial project in the Middle East.

AP: Iran's official news agency is reporting that a...

Reuters: A Lebanese protester was killed outside the Iranian...