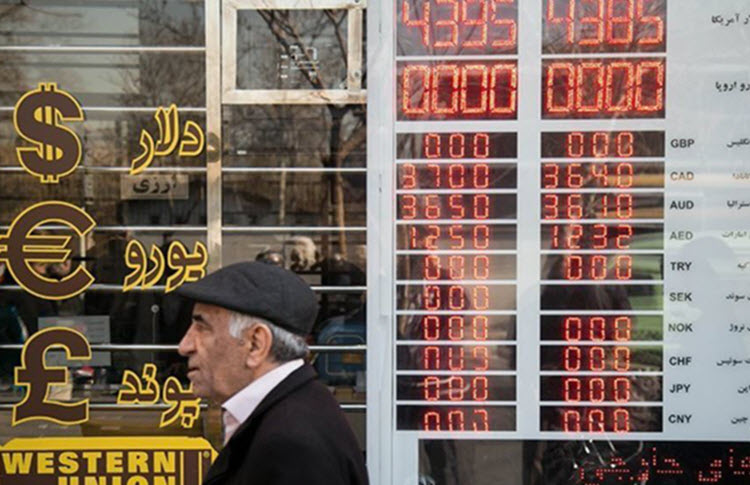 London, 18 Apr – Chaos is still rampant in Iran’s foreign exchange market a week after the Iranian Government artificially set the currency exchange rate at 42,000 rials to the US dollar.

This move, which Paris-based economist Fereidoun Khavand described as “a very dangerous game”, was an attempt by the Hassan Rouhani administration to control the incredible devaluing of the rial. The rial hit an all-time high of 61,000 rials to the dollar on April 10.

Some street exchange bureaus flouted the laws by selling dollars for 53,000-55,000 rials, but a few of them have been arrested and threatened with the death penalty. Other offices have closed down altogether.

This has put extra pressure on traders in Iran, who have had problems with foreign currency transactions that have nearly bankrupted them, according to Mohamad Farahani, the chairman of the Foodstuff Importers Union.

It has also heavily affected travellers who are unable to exchange more than 1,000 Euros worth of currency at a time – if they can get the money at all.

Of course, the Iranian Government is desperate to find a scapegoat for the economic crisis. This is easier than admitting that the rial has been steadily falling against the dollar since the mullahs took power in 1979.

They’ve blamed foreign companies for not investing in Iran and foreign countries for imposing sanctions on the Government, all so that they can avoid acknowledging the real problem: corruption in the Government.

Thus, on April 15, 63 MPs have demanded that Central Bank Governor Valiollah Seyf be fired for his role in the economic problems.

One day later, Seyf met at the government’s economic headquarters to insist that if the Central Bank’s policies were implemented, the exchange rate would only fluctuate 5-6% per year.

To be clear, the entire Government is responsible for this problem. They plough the country’s money into their own pockets or proxy wars, and then blame anyone else for the economic problems that they caused.

The Iranian people have clearly stated this during their nationwide anti-government protests earlier this year and they should be listened to.

They chanted that their leaders should forget about Gaza and Syria – where they are intervening to cause more sectarian violence – and focus on the people of Iran, a third of whom live in absolute poverty.

Khavand said: “The reasons behind the disruption of Iran’s exchange market are mainly the confrontational foreign policy of the Islamic Republic [and] uncertainty about the future of the Joint Comprehensive Plan of Action (JCPOA).”

This deal could be scrapped as soon as next month, meaning that people are less likely to invest in Iran. However, the money invested is going into the mullahs’ war chest, not programmes for the Iranian people and that is one reason behind the strive of the Iranian people for regime change.

AFP: The teachings of the Jewish book of law,...

Iran’s Failing Economy Could Spell the End for President Rouhani