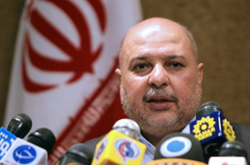 “We have attained daily domestic production of 66.5 million litres of petrol in our refineries,” Mirkazemi was quoted as saying on state television’s website.

“But we have been able to achieve this (higher) production over the past 20 days following the sanctions and mischief of some sellers who hiked petrol prices.”

Iran recently said it had launched an emergency plan which could make it self-sufficient in petrol by the end of the current Iranian year to March 20, 2011. Prior to that Tehran said it would cover its own needs for the refined oil product by 2012.

Despite holding around 10 percent of world oil reserves and being the second-largest producer in the OPEC oil cartel after Saudi Arabia, Iran has had to import large volumes of petrol due to its lack of refining capacity and inefficiency problems.

Oil experts claim that in recent weeks Iran has been importing less of the product, which has been targeted in the latest round of sanctions by world powers.

Ahead of the June sanctions imposed by UN Security Council against Iran, several Western and European companies such as Total, Shell, and Vitol had stopped supplying petrol to the Islamic republic.

Since then Iran’s imported petrol needs have been largely met by Turkish and Chinese companies.

West optimistic about UN deal with Russia on Iran

Reuters: Western powers on the Security Council were optimistic...

420 political protests in Iran in past month