Reuters: In Tehran’s Grand Bazaar, the vaulted alleys that normally ring to the hammers of goldsmiths, have been quiet recently; the doors of the gold merchants shut. 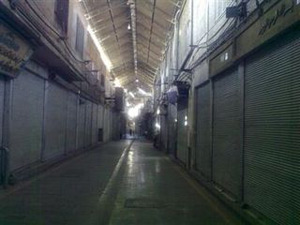 TEHRAN, Oct 13 (Reuters) – In Tehran’s Grand Bazaar, the vaulted alleys that normally ring to the hammers of goldsmiths, have been quiet recently; the doors of the gold merchants shut.

The latest strike by Iran’s powerful merchants against a new tax lasted several days and pointed to wider unease among Iranians over the government’s handling of an economy already squeezed by ever-tighter international sanctions over its nuclear programme.

“They’ll stay on strike until the government abolishes the (new) 3 percent value added tax,” a watch seller on a stall next to the closed gold shops said.

The government, which battled a general strike at the bazaar in July over another tax hike, has threatened to punish traders if they do not return to work. But economic worries are spreading among shoppers not just merchants.

Plans to end food and fuel subsidies have raised fears of an inflation spiral that will cut ordinary people’s spending power.

The central bank intervened in recent weeks to reverse a sudden 13 percent fall in the rial and reassure Iranians their savings were safe. But hundreds of people still crowd outside the exchange bureaux in Tehran, where fears of further depreciation have caused a rush for dollars and gold — ever the safe havens in uncertain times.

“People are buying dollars because they are certain there is going to be inflation after the implementation of the subsidy reform plan and inflation means the devaluation of the rial,” said one Tehran shopkeeper.

Cutting subsidies, which cost Iran nearly $100 billion a year, is a risky strategy for the government and may revive anti-government protests that shook the country for months after last year’s disputed presidential elections.

Disaffection among traditional supporters of the government over its handling of the economy has even come from some senior members of the Islamic Republic’s clergy.

“It is reported every day that inflation has dropped but this is the opposite of what people are witnessing,” Grand Ayatollah Naser Makarem Shirazi told worshippers in a recent Friday sermon, warning officials not to play down the economic challenges.

President Mahmoud Ahmadinejad, whose country faces tightening sanctions over Western accusations it is developing a nuclear bomb, blamed the currency slump on speculators.

“With propaganda in the foreign currency market they made the (exchange) rate fluctuate,” he said in a speech during one of his regular visits to the provinces. “They make trouble for the export market, the retail market and the import market.”

In a courtyard just off Ferdowsi Street, a noisy Tehran thoroughfare where the money changers are clustered, the men he was referring to were doing a feverish trade.

In nearby back streets, unlicensed traders, bundles of notes in their hands, were offering dollars at a negotiable mark-up to anyone willing to pay a premium to avoid the queues.

Speculators may be cashing in, but analysts say the crash was sparked by banks in Dubai, a vital trading partner across the Gulf, refusing to touch the rial as sanctions tightened.

This caused a sudden shortage of dollar notes in Iran, whose banks are almost entirely isolated from the rest of the world, though the country has ample foreign currency reserves from the sale of its crude oil on the world markets.

The fourth round of U.N. sanctions calls for vigilance over transactions with any Iranian bank, including the central bank, while more and more foreign firms are cutting back business with Iran to avoid falling foul of even tighter U.S. and European Union rules.

With rising taxes, falling subsidies, foreign markets restricted by sanctions and increasing difficulty getting access to the hard currency they need for trade, more and more businesses are reporting problems.

Customers at a large store selling refrigerators, televisions and other imported electrical appliances were told they would have to wait for new stock to arrive and that prices might have to increase due to the currency fluctuation.

One Iran analyst, who asked not be identified, said the policy of keeping a strong rial was largely due to political “pride and prestige” and a gift to importers while being extremely damaging to potential Iranian exporters.

Ironically, Iran stepped in to restore rial strength just as major world economies are involved in what economists call ‘race to the bottom’, keeping their currencies low to help exports.

PROPPING UP THE RIAL

Ahmadinejad has promised cash handouts to help the needy survive the subsidy cuts, but critics say the details are vague and most Iranians are bracing themselves for major price rises.

That too could add to pressure on the rial, which some economists say is overvalued by 30-50 percent or more, taking into account Iranian inflation which has just come down to under 10 percent but for many years was 30 percent.

Iran loosely pegs its rial to major world currencies, so the recent decline over five days prompted analysts to ask if it was deliberate devaluation or a scramble for dollars due to fears of hard currency scarcity in a country hit by financial sanctions.

Iran has allowed the rial to fall 4-5 percent a year against the dollar, but last month’s short-lived drop was unusually sharp.

“So long as oil prices are high, Iran can decide to hold the rial at above a real value. But in doing so it is harming the Iranian industrialists and subsidising imports,” the analyst said, adding that the rial would have to be devalued eventually.

“You can’t have such a spread between inflation in Iran and the U.S. and the devaluation so small… It is inevitable and unsustainable, but no one can predict when with any accuracy.”

Even Iranian media are speculating about a devaluation.

“If the pressure on the central bank increases its ultimate solution would be to change the basic exchange rate,” the semi-official Fars news agency quoted Houshang Shajari, an economist, as saying, urging the central bank to “stop wasting its foreign currency reserves” propping up the rial.

Reuters: Malaysia plans to team up with Iran and...