AP: The most potent challenge to Iran’s ruling system may not be international sanctions or the homegrown political opposition, but something as simple as a shopping list. 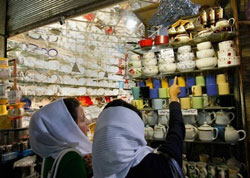 DUBAI, United Arab Emirates (AP) — The most potent challenge to Iran’s ruling system may not be international sanctions or the homegrown political opposition, but something as simple as a shopping list.

When Sanaz, a 47-year-old Tehran mother, goes to market these days, she digs deeper into her purse for the basics: bread prices up more than fivefold, cooking oil more than double, cuts of lamb about triple from last year.

“How much can we stand?” said Sanaz, who gave only her first name because of security fears. “People are very angry and very worried.”

It is just the beginning of more expected price hikes, including for Iran’s cut-rate gasoline, as Islamic leaders start trimming an estimated $100 billion a year in government subsidies for fuel and food staples that many low-income Iranians consider a birthright.

Authorities are treading with caution. They are keenly aware that a popular backlash over prices and living standards may be far more difficult to contain than last year’s street unrest over allegedly hijacked elections. The reason is that any pocketbook outrage would likely bring out the working-class Iranians who have been the bedrock for President Mahmoud Ahmadinejad and the ruling system.

Already, powerful merchants in Tehran’s bazaar and elsewhere have staged strikes over what they claim are government tactics to squeeze out more taxes and fees. Couple that with the growing roll call of international companies pulling out of Iran because of sanctions over Iran’s refusal to halt nuclear fuel production.

It adds up to a level of economic insecurity that has officials anxious enough to mount a relentless spin campaign, claiming the subsidy cuts are actually a way to close the rich-poor gap and assuring that the latest sanctions can do little harm after decades of economic curbs by the West.

But there also has been some apparent muscle flexing to back it up. A noticeable increase in security forces around Tehran this week is interpreted as a blunt message to any groups considering protests over the subsidy cuts.

“The economy is the weak link for Iran’s leaders, and they know it,” said Mustafa Alani, a political and security analyst at the Gulf Research Center in Dubai. “You can try to silence and block political opposition, but you can’t do that when prices are rising and people are worried about the future.”

Iran had planned the unpopular subsidy cuts before the latest U.N. and American sanctions. Ahmadinejad and his allies insist the country’s oil-based economy could no longer afford the largesse.

The twin blow with the tighter sanctions, however, has amplified the sense that Iran’s economy is moving into uncharted territory.

Take, for example, Sina Maleki’s electronics shop in central Tehran. The coveted Apple iPhone, shipped to Iran through intermediary companies in Dubai, is no longer arriving. The alternative is perhaps a knockoff phone from China.

The same is true for spare car parts from Europe and even top-quality cookies from Britain.

And what goods do enter Iran are costing more.

The president of Iran’s chamber of commerce, Mohammad Nahavandian, said import prices for most goods have risen by 15 to 30 per cent. The reasons include companies, particularly Asian firms, bumping up prices because they know Iran is now a desperate market and insurance is difficult if not impossible to obtain on shipments to Iran.

One importer of industrial equipment, including materials for cement production, said his Italian suppliers have stopped shipping to Iran because of sanctions. Now, he has turned to Chinese manufacturers that provided lower-quality equipment and demand 100 per cent upfront payment.

“They don’t accept any letter of credit because of banking restrictions against Iran,” said the industrialist, who gave only his first name, Masoud, because of fears of government reprisals. “Because of sanctions, I have to pay more to get the same goods. It’s now more risky and more costly to do business.”

There is a very different tone coming from Iran’s leaders.

Commerce Minister Mahdi Ghazanfari says sanctions “don’t respond to the present century” because of growing regional trade with neighbours such as Turkey and Central Asia. Ahmadinejad, meanwhile, has boasted that Iran’s foreign currency reserves stand at a healthy $100 billion, boosted by oil sales and the purchase of gold before its price surge in the past year.

Washington has tried to leverage one of Iran’s weak links, its shortfall in domestic refinery capacity, by seeking to block imports of pump-ready fuel. This has caused some shortages. But OPEC giant Iran still brings in 80 per cent of its revenue through exports of crude oil, which pushed above $86 a barrel on Friday.

“Sanctions have increased living costs, but won’t cripple Iran’s economy,” said Tehran-based political analyst Majid Deljoo. “Sanctions that do not include export of crude oil won’t have any serious effect.”

If the posturing by Iranian officials is any measure, then the hit from sanctions is definitely taking a back seat to the worries over the coming price increases.

The full plan is still a state secret. Only Ahmadinejad and a few close aides reportedly know how fast and far the subsides will be lifted for commodities including fuel, bread, cooking oil and household items such as washing detergent.

With no one quite clear how much prices could rise, there has been hoarding runs on basics such as sugar and rice. At a meeting last month in Dubai, an envoy from Tehran’s chamber of commerce was peppered with questions about the subsidy cuts. He had few clear answers.

About the only possible gauge of the economic hit is the special cushion fund offered by the government to about 53 million Iranians who signed up. Payments of about 810,000 rials ($81) are moving into bank accounts as a promised two-month buffer against higher prices. Ahmadinejad said more financial help could be coming later.

But the money cannot be touched until the government gives the go-ahead. There also are questions about whether it will do anything to ease the economic shock. Iran’s inflation already exceeds 20 per cent. One liberal lawmaker, Jahanbasksh Amini, was quoted as predicting at least a 30 per cent rise in food and food staples with subsidies removed.

Opposition leader Mir Hossein Mousavi agreed the subsidy cuts are needed to help balance Iran’s books. But he complained that credible economists and fiscal planners have been excluded from drawing up the plans.

“Most prominent and competent experts have been sidelined,” he was quoted Monday by the pro-reform website sahamnews.org.