Bloomberg: Tougher U.S. sanctions on Iran are costing the Islamic regime as much as $60 billion in lost energy investments, Undersecretary of State William Burns said today. 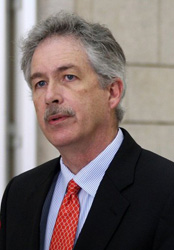 “According to reliable estimates, Iran may be losing as much as $50 billion to $60 billion overall in potential energy investments, along with the critical technology and know-how that comes with them,” Burns said at a House Foreign Affairs Committee hearing.

Iran is under sanctions designed to keep the country from developing nuclear weapons. Iran says it is enriching uranium for peaceful purposes. The United Nations Security Council in June adopted a resolution calling for trade and financial penalties. The U.S., European Union and nations including Japan and South Korea followed with their own sanctions.

U.S. officials say the force of those sanctions is driving Iran back to the negotiating table.

Iran’s President Mahmoud Ahmadinejad said yesterday he is ready for talks with an EU-led group that includes the U.S., China, Russia, France, the U.K. and Germany. The parties, which last met more than a year ago, will meet Dec. 6-7 in Geneva, the office of EU foreign policy chief Catherine Ashton said yesterday in Brussels.

Iran is becoming “relegated to the margins of the international financial system” because of sanctions and is finding it difficult to conduct commercial transactions, Stuart Levey, Treasury undersecretary for terrorism and financial intelligence, said at the hearing. “A growing number” of financial institutions are “shying away from doing any kind of business with Iran.”

AFP: The European Union confirmed Monday that a ban...