Reuters: Oil’s ascent towards $100 a barrel, which OPEC blames on western financial speculators, has handed Iran a windfall to help contain domestic discontent and take the sting out of sanctions designed to squeeze its economy. 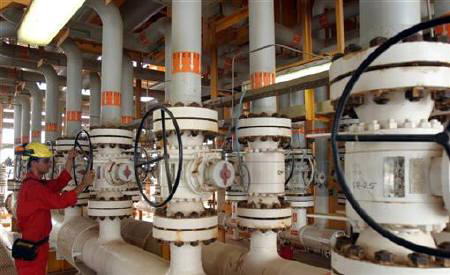 TEHRAN, Jan 20 (Reuters) – Oil’s ascent towards $100 a barrel, which OPEC blames on western financial speculators, has handed Iran a windfall to help contain domestic discontent and take the sting out of sanctions designed to squeeze its economy.

Tehran’s financial room for manoeuvre is likely to expand, while oil prices are expected to stay firm following a rally that earlier this month took it to its highest level since October 2008.

“A particular challenge for the United States is that rising oil prices undermine policy on Iran,” said Simon Henderson, of the Gulf and Energy Policy Program at the Washington Institute think-tank.

Washington has led the drive to isolate Iran and bring it to the negotiating table over its nuclear programme and says the sanctions are working.

Along with the other four permanent members of the United Security Council and Germany, the United States and Iran are due to meet in Istanbul on Saturday and Sunday for talks it hopes will lead to an end to the nuclear stand-off.

Henderson cited U.S. Department of Energy figures, however, that put Iran’s January-November 2010 revenues at $64 billion, $11 billion higher than for the whole of 2009.

A populous nation with high social costs, Iran needs a stronger oil price than its wealthier Gulf neighbours to avoid racking up a deficit.

Its budget reckons on oil at $65 — below current prices of around $90 a barrel, although roughly in line with some analysts’ calculations of the level Tehran needs to balance its books.

IHS Global Insight, for instance, assumes export volumes of just over 2 million barrels per day (bpd) from Iran, which means it would need oil at only $60-$70 for a balanced budget.

Ramin Emadi of Middle East consultancy BEDigest.com predicted an average price of $80 for the Iranian year that runs until March 20, giving it a surplus of at least $15 per barrel.

As holder of the rotating presidency of the Organization of the Petroleum Exporting Countries, Iran has done its best to talk up the price, saying the world can cope with oil at this level and there is no need for producers to increase output.

Other OPEC ministers have also said there is no need for extra oil and that any exuberance in the market is the result of financial players.

For Iran, some of the higher revenue will have to go towards meeting increased costs connected with the sanctions.

India, Iran’s second-biggest customer after China, has embarked on talks to seek a solution over how to pay Iran for its oil without breaching restrictions on dealing with Iranian banks.

Gasoline imports, which Iran needed following underinvestment in its refinery industry, have been virtually suspended, and it has adapted its petrochemical industry to produce fuel and achieve what it says is self-sufficiency.

There are attendant costs in terms of lost petrochemical revenues, which analysts say are very difficult to quantify, while the Iranian public is paying a lot more for its gasoline.

None of President Mahmoud Ahmadinejad’s predecessors dared to drive through a cut in subsidies on the prices of fuel, food and other necessities that have cost roughly $100 billion a yeay — a bill that rising commodities prices push higher.

So far the Iranian public has accepted price rises without the unrest some analysts had predicted.

Bill Farren-Price of Petroleum Policy Intelligence said the sanctions — seen from Tehran as an attack led by its foreign enemies — had provided a political excuse.

“International sanctions are … having the perverse result of allowing the government to push through austerity measures on fuel and food subsidies that were simply unthinkable in the last two decades,” he said.

While Ahmadinejad is empowered by costly oil, the international community, still smarting from economic crisis, is nervous about action that could drive oil prices higher.

Juan Cole, a professor of Middle East history at University of Michigan, said a higher oil price reduced the risk that Washington or its Middle East ally Israel would attack Iran.

Both have said they could do that if nothing else halted Iran’s nuclear programme, which they say is aimed at getting nuclear weapons. Iran says it is entirely peaceful.

“I think the high petroleum prices in the context of a weak U.S. economy make military action less likely. You would not want to risk administering a ‘Bush I’ to yourself,” he told Reuters, referring to the first President George Bush’s war on Iraq, which he believes exacerbated a U.S. recession.

“Ahmadinejad must enjoy sticking the West with this winter’s high prices, as a little revenge for the sanctions.”