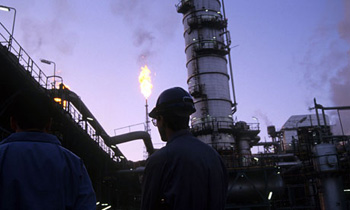 The minister, Rostam Qasemi, had been the chief of the economic conglomerate until his appointment last week to the government post.

The economic conglomerate, Khatam-ol-Anbiya, is the Revolutionary Guard’s most important economic unit and is the largest contractor of government projects including major oil and gas projects.

“Khatam-ol-Anbiya … should convert to a successor to foreign big companies,” Qasemi said, according to IRNA.

His remark is seen as a reaction to the pressure that sanctions are putting on foreign companies working in Iran. Several oil companies, including Total SA and Royal Dutch Shell, have withdrawn from the country over the past years. Some Chinese and Indian companies are still working there.

Qasemi said Khatam-ol-Anbia should be improved and said he still feels that he is still working for the Guard.

“I am assigned to the Oil Ministry, but I am obsessed by the Guards,” he said, according to IRNA.

“The Guards should have a pioneer role in the economic fronts in the country,” Jafari said, according to the semiofficial Mehr news agency. “There is a special expectation from the Oil Ministry. The sources should be spent for infrastructure projects.”

Khatam-ol-Anbiya has some $25 billion contracts in various oil and gas projects in Iran.

The United States accuses Khatam-ol-Anbiya of funneling revenues from its construction business back into Iran’s nuclear program, which Washington suspects aims to develop atomic weapons.

Tehran denies Western allegations that it is pursuing nuclear weapons and says its program is for peaceful purposes such as power generation.

Iran is in need of both foreign investment and technology to upgrade its vital oil industry, which represents some 80 percent of its foreign revenue.

Qasemi said Saturday that Iran will need some $40 billion in the current year to develop oil and gas fields.

Getting Tough on Iran Will Prevent War, Not Cause It