AFP: Iran’s currency market was in turmoil Wednesday as the central bank imposed draconian measures to try to shore up its beleaguered rial in the face of existing and looming Western sanctions. 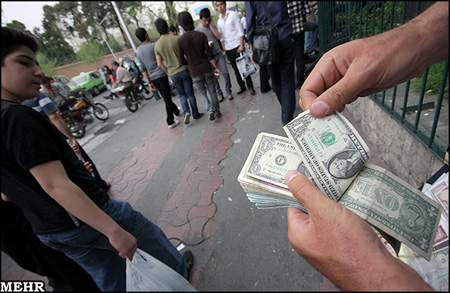 TEHRAN (AFP) — Iran’s currency market was in turmoil Wednesday as the central bank imposed draconian measures to try to shore up its beleaguered rial in the face of existing and looming Western sanctions.

The bank was imposing a fixed low rate of 14,000 rials to the dollar on the open market, traders said.

Some had shuttered their shops in the centre of Tehran, refusing to make transactions at that artificial level.

The central bank also halved the amount of dollars Iranians flying abroad could buy at a slightly lower preferential rate, to $1,000 instead of the $2,000 previously allowed, according to an official statement relayed by media.

The measures were applied after the rial lost 12 percent Monday, days after the United States enacted new sanctions against Iran’s central bank.

The European Union is expected to follow up with its own economic sanctions on Iran at the end of this month. France, Britain and Germany are calling for an EU embargo on Iranian oil imports to be adopted.

The Iranian central bank’s imposed rate of 14,000 rials to the dollar theoretically pumped up the value of the Iranian currency 21 percent from a record low 17,800 it hit Monday.

The Association of Iranian Exchange Bureaux issued a statement saying its members, who are licensed by the central bank, were instructed to stick to the 14,000 rate.

But exchange bureaux that had not shut their windows Wednesday were refusing to sell dollars at all.

Street money-changers were walking around discreetly offering the much-higher rate of 15,700 to the dollar.

The IRNA and ISNA news agencies also posted a going rate of 15,600 on their websites.

He added that the government was considering “a number of measures to control the exchange market.”

Iran insists the volatility of the rial is not the result of sanctions.

It “definitely has nothing to with sanctions,” foreign ministry spokesman Ramin Mehmanparast said on Tuesday.

He imputed the sharp movements to domestic shifts in capital, for instance into the real estate sector.

The head of the central bank, Mahmoud Bahmani, said on Tuesday: “I declare absolutely that the international sanctions have not created any economic problem for the country. The enemies know that and are trying to create psychological tensions. But we won’t play their game.”

He urged Iranians to refrain from buying dollars.

US and other Western nations have imposed sanctions on Iran’s economy over Tehran’s controversial nuclear programme.

According to OPEC, Iran gets 80 percent of its foreign revenues — around $100 billion over the past year — from oil exports.

The country’s budget has been calculated on the basis of 10,500 rials to the dollar.

AP: The Berlin film festival is criticizing the arrest...