This article is part of our series that explores liquidity in Iran and its harrowing impact on various elements like the country’s financial systems, citizens’ livelihood, industry, and agriculture.

On June 18, the Islamic Republic is supposed to hold the thirteenth Presidential election in post-1979-revolution Iran. In the past part, we discussed candidates’ ‘economic plans and promises,’ noting that they could not care less about financial resolutions.

As one of the major dilemmas in Iran’s economy, we scrutinized liquidity and its horrible impacts on citizens’ livelihood. Indeed, candidates do not have any initiative to rescue the country’s finance. This is another reason, which places nationwide apathy on the horizon.

These days, there are circulated many videos published by ordinary people, particularly the families of the November 2019 protests’ victims and low-income classes, openly calling their fellow citizens to boycott the election. Rather than an election, they name the event ‘selection’ whose winner had been specified priorly.

“The current rulers merely think how to line their pockets with people’s savings and national reserves,” a citizen frankly said. “All of them have been accused of numerous corruption and embezzlement cases.”

“Our vote would change nothing, and this ‘selection’ is only a publicity cynical stunt to justify the ayatollahs’ illegitimate rule,” a citizen said in an audiotape posted on social media.

Furthermore, high-ranking officials plainly underscore this reality that the government only pursues to justify its rule through the election while it lethally silences any economic demand and protest, observers say.

On the other hand, while the candidates avoid providing financial plans, Sayed Nasir Hosseini, the Supreme Leader’s representative and Friday Prayer Imam of Yasouj in Kohgiluyeh and Boyer Ahmad province, believes that participation in the election is a solution for economic dilemmas. “Refusing to participate in the election will increase economic problems,” Tasnim news agency quoted Hosseini as saying on June 10.

“Dirty money is circulating in the candidates’ headquarters. The same money is the source of the huge volume of banners and posters and the million-dollar trip with the rental of a private plane,” tweeted Abdolnasser Hemmati, the former governor of the Central Bank of Iran (CBI) and a 2021 Presidential election candidate, on June 11. 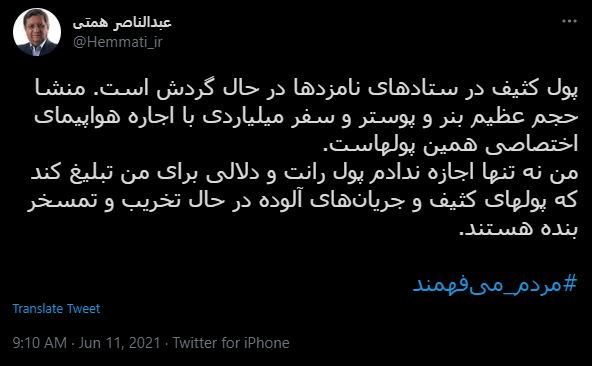 However, the former CBI governor also ignored to provide a comprehensive plan for Iran’s bankrupted economy. He only used information to attack his rivals and take personal advantages. Indeed, he is a key part of the corrupt system that has brought massive financial crises like inflation, liquidity, and high prices to the people.

“If I took office, I would introduce Mr. Rezaei to [Judiciary Chief Ebrahim] Raisi as a disrupter for the country’s economic aspect,” said Hemmati during a televised debate addressing Mohsen Rezaei, the former chief of the Islamic Revolutionary Guard Corps (IRGC) and a Presidential election candidate.

“Mr. Mohsen Rezaei and Mr. Saeed Jalili; you do not know even primary economic issues in the country,” Hemmati added blaming Rezaei and Jalili, the former Supreme National Security Council secretary, for their ignorance.

In response, Rezaei threatened Hemmati with treason allegations. “You, Mr. Hemmati, have accompanied U.S. sanctions. If I took office, I would ban you from departing the country and bring you and several other officials in this administration to trial,” Rezaei said during the same televised debate.

Meanwhile, Rezaei pointed to a deep rift in society. “Today, there is neither relation between the government and economy nor between the people with economy,” he added.

However, while economic dilemmas are the people’s main concern, authorities follow other grips through the coming election. Ahmad Alamolhoda, the Supreme Leader’s representative, and Friday Prayer Imam of Mashhad in Razavi Khorasan province, unveiled authorities’ actual purpose from holding the election. These days, while he does his best for his son-in-law Raisi’s Presidency, he admitted to the Islamic Republic’s need of the election for justifying its terrible ruling.

“They attempt to prevent us from participating in the election. Western states and the arrogant movement try to pretend ‘[apathy] as an anti-establishment referendum if the people did not participate.’ They would like to say that the people are no longer loyal to the state… In fact, they propaganda that the [Islamic Republic] had reached the end of the rope and finished,” Alamolhoda said.

Sayed Ahmad Khatami, a member of the Assembly of Experts Presidium, highlighted the Iranian government’s turmoiled condition reckoning that the participation in the election is the sole path for extending the ayatollahs’ ruling system.

Furthermore, Sayed Abolhassan Navvab, the dean of University of Religions and Denominations, described participating in polls as a security object. He implicitly admitted that the people’s vote is worthless.

“In such status quo, we need the highest amount of people’s participation for strengthening our ‘national’ security. It does not matter who would be the winner. If dozens of millions of people participated in the election, it means that they are still loyal to the state,” said Navvab on June 15.

Therefore, as government-backed economists and analysts say that the country has plunged into economic dilemmas and is on the verge of collapse, high-ranking officials prioritize ensuring the theocracy’s survival rather than improving people’s living conditions.

On the other hand, Raisi’s untransparent background as the former Astan Quds Razavi chief, the biggest endowment conglomerate in the Middle East, and Hemmati’s disastrous record as the former CBI governor put a more dire situation for Iranian families on the horizon.

Indeed, the people of Iran are the lone part that gains nothing through such elections, and their food baskets are getting emptier due to systematic corruption, rampant inflation, liquidity, poverty, and the devaluation of the national currency rial.

“Only new thieves replace with former thieves,” a citizen plainly said his opinion about the election. “They are all cut from the same cloth. They had held crucial occupations in the past 42 years, and nothing will change,” a woman said, blaming the entire ruling system for financial crises.

Reuters: The European Union is poised to ban imports...