AFP: UN human rights chief Navi Pillay on Friday warned torturers that they could not escape justice even if they might benefit from short term impunity. 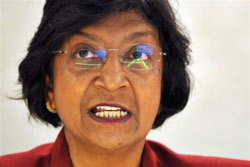 GENEVA (AFP) — UN human rights chief Navi Pillay on Friday warned torturers that they could not escape justice even if they might benefit from short term impunity.

“Torturers, and their superiors, need to hear the following message loud and clear: however powerful you are today, there is a strong chance that sooner or later you will be held to account for your inhumanity,” Pillay said.

“Torture is an extremely serious crime, and in certain circumstances can amount to a war crime, a crime against humanity or genocide,” she added in a statement to mark Saturday’s International Day for the Victims of Torture.

The High Commissioner for Human Rights urged governments, the United Nations and campaign groups “to ensure that this message is backed by firm action.”

“No one suspected of committing torture can benefit from an amnesty. That is a basic principle of international justice and a vital one,” Pillay added.

“I am concerned, however, that some states rigidly maintain amnesties that save torturers from being brought to justice, even though the regimes that employed them are long gone.

“As a result there are a number of well-established democracies that generally abide by the rule of law, and are proud to do so, which are in effect protecting torturers and denying justice,” said Pillay.

That often, as a result, denied their victims reparations.

The UN human rights chief noted that more people were being prosecuted for torture every year, including recent prosecutions in Chile and Argentina for cases dating back to the 1970s and 1980s.

She also highlighted the looming verdict in Cambodia’s war crimes tribunal on former Khmer Rouge prison chief Kaing Guek Eav, commonly known as ‘Duch’ which is due on July 26.

“There is one aspect of all this that should cause even the most ruthless and self-confident torturers to stop and think: in time, all regimes change, including the most entrenched and despotic.

“So even those who think their immunity from justice is ironclad can — and I hope increasingly will– eventually find themselves in court,” Pillay added.

How Iran Is Winning Iraq

Washington Post: If you had asked an intelligence analyst...