AFP: Amnesty International has called for “full disclosure” from the Iranian authorities in the case of two men ordered to hang for the murders of at least three jailed anti-government protesters. 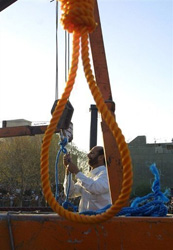 LONDON (AFP) — Amnesty International has called for “full disclosure” from the Iranian authorities in the case of two men ordered to hang for the murders of at least three jailed anti-government protesters.

In a statement released late on Friday, it called for “the full facts of the investigation into the torture and other serious abuses that were committed at Kahrizak and the details of the charges and evidence” against those convicted.

“Such a disclosure is essential to ensure that the rights of the victims and their families to truth and justice are upheld,” said the London-based rights organisation.

“Amnesty International is also urging the Iranian authorities to disclose the names of the defendants and the positions that they held at the time of the events at Kahrizak, and to provide details of their trial.”

Iran’s state news agency IRNA reported on Wednesday that a military court has sentenced two men to death for the murders of at least three protesters in the notorious Kahrizak jail, south of Tehran.

The death sentences were the first involving those accused of abusing protesters who opposed the re-election of President Mahmoud Ahmadinejad in a disputed June 2009 poll.

It said the two, who under Iranian law have 20 days to appeal, were found guilty of “inflicting intentional abuse leading to the murder of Mohammad Kamrani, Amir Javadi-far and Mohsen Ruholamini.”

Iran’s judiciary said at the start of the trial in March that 11 policemen and one civilian were facing charges over the deaths last summer in Kahrizak.

The case has caused major embarrassment to the Islamic republic, which acknowledged, after months of denial, that the deaths at the detention centre were the result of injuries inflicted in Kahrizak.

The centre was shut down last July at the order of Iran’s supreme leader Ayatollah Ali Khamenei following reports of abuse.

During the trial, the defendants’ identities were not disclosed, Amnesty noted, “prompting suspicion that they may be low-ranking officials who are effectively being made the scapegoats for a wider system of abuse.”