UPI: Iranian lawyer Mohammad Ali Dadkhah, who has defended political and human rights activists condemned to death, has himself been sentenced to nine years behind bars amid a crackdown on dissent that has resulted in a sharp increase in executions. United Press International – Special Reports 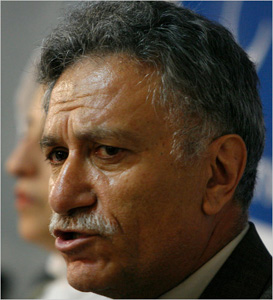 BEIRUT, Lebanon, May 9 (UPI) — Iranian lawyer Mohammad Ali Dadkhah, who has defended political and human rights activists condemned to death, has himself been sentenced to nine years behind bars amid a crackdown on dissent that has resulted in a sharp increase in executions.

“I’ve been convicted of acting against the national security, spreading propaganda against the regime and keeping banned books at home,” Dadkhah told Britain’s The Guardian newspaper by telephone from Tehran.

He has represented several activists imprisoned in the crackdown triggered by the massive street protests surrounding the disputed March 2009 presidential election in which Mahmoud Ahmadinejad won a second four-year term.

Dadkhah, co-founder of Iran’s Center for Human Rights Defenders, described the almost surreal circumstances in which he found out about his conviction.

“I was in court in Tehran defending one of my clients, Davoud Arjangi, a jailed political activist on death row, when the judge told me that my own sentence had been approved and that I would shortly be summoned to jail to serve the nine-year sentence,” he said.

Dadkhah had been sentenced in July 2011 on charges of plotting to overthrow the government. He had appealed against the sentence.

One of his clients is 81-year-old cancer-stricken Ebrahim Yazdi, who for years led the Freedom Movement of Iran advocating human rights and democratic government. He’s known as Iran’s oldest political prisoner.

Yazdi, a former confidante of the late Ayatollah Ruhollah Khomeini and a deputy prime minister in the interim government formed in 1979 after the Islamic Revolution, was sentenced in December 2011 to eight years in prison for “collusion against national security.”

Dadkhah is a close associate of Shirin Ebadi, a former judge and human rights activist awarded the 2003 Nobel Peace Prize. She fled Iran in 2009 to escape prosecution.

Amnesty International has reported a sharp increase in executions carried out in Iran over the last year or two.

These are widely seen by human rights activists as intended to intimidate dissidents whose activities have intensified since the crackdown that followed the 2009 unrest.

Those protests against an increasingly repressive regime preceded the pro-democracy uprisings in the Arab world by almost two years.

But a surge in executions in Saudi Arabia, Iraq and Yemen prompted AI to report in March that this was intended to stifle that same dissent.

“The escalating use of the death penalty in the Middle East is seen as a tactic by the authorities to spread fear among dissidents in order to prevent them from participating in pro-democracy movements,” the Guardian said.

AI said confirmed executions in the Middle East increased by almost 50 percent in 2011 to 558.

More than half of the 2011 global total were conducted in Iran, which carried out 360 known executions.

But human rights groups say there’s credible evidence scores that Iran carried out other unreported executions, including mass hangings, in secret in 2011.

The sharp rise in the number of executions reported in Iran has raised suspicions the Tehran regime has, according to British international affairs analyst Simon Tisdall, engaged in “a judicial killing spree” to intimidate its opponents.

Human rights organizations say this underlines the alarm within the regime that Iran could be infected by the wave of pro-democracy uprisings that toppled dictators in Tunisia, Egypt, Libya and Yemen in 2011.

AI said there were 253 reported executions in the first six months of 2011, with another 300 people believed to have been killed, including juveniles.

These take place behind the forbidding walls of notorious prisons like Evin in Tehran, where thousands have perished since the 1979 Islamic Revolution, and Vakilabad in the eastern holy city of Mashhad, a major hub for heroin smuggling from Afghanistan.

Amnesty said it had received reports of secret mass executions in Vakilabad, with 89 people hanged there in August 2010.

A former inmate told the International Campaign for Human Rights in Iran that he witnessed 46 executions in one day there in October 2009.

“A second-term presidency launched amid bloodily suppressed riots in 2009 now appears to be assuming an even more vicious character as reports accumulate of ongoing secret mass executions and new waves of political repression,” Tisdall wrote.