The Guardian: Today is the fifth anniversary of the unjust imprisonment of seven Bahá’í leaders in Iran. They were jailed for 20 years for no reason other than their beliefs – the longest jail terms handed down against any prisoners of conscience in the country. A global campaign is under way to remind Iran that it has legal and moral obligations to treat its religious minorities with justice 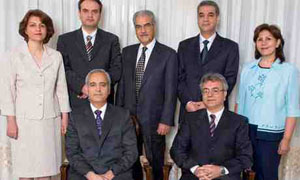 Today is the fifth anniversary of the unjust imprisonment of seven Bahá’í leaders in Iran. They were jailed for 20 years for no reason other than their beliefs – the longest jail terms handed down against any prisoners of conscience in the country – and today I’m sending a message to Iran: even five years are too many.

A global campaign is under way to remind Iran that it has legal and moral obligations to treat its religious minorities with justice – the Five Years Too Many campaign. But for decades Iran has walked all over the human rights of its citizens. The persecution of religious minorities is at the heart of this violence.

Iran’s religious minorities are arrested on fatuous charges, endure trials that violate the state’s own due process, are jailed on unproven convictions and tortured in prison. Converts from Islam are branded apostates. Homes, businesses and places of worship are raided and torn apart. Students are kicked out of university because of their beliefs. And cemeteries are desecrated so not even the dead can escape.

And yet Iran is signed up to international treaties and covenants on human rights; the government has broken its bond. The abuse hits other religious minorities, too – the Yarsan Kurds; Gonabadi Dervishes, who are Shia Muslims; and Christians.

The seven Bahá’í leaders – Fariba Kamalabadi, Jamaloddin Khanjani, Afif Naeimi, Saeid Rezaie, Mahvash Sabet, Behrouz Tavakkoli and Vahid Tizfahm – were held for months without charge after their 2008 arrest and were finally subjected to a series of trials that made a mockery of justice. Ministry of Intelligence agents had cameras in the courtroom but international observers and family members were barred from the proceedings.

And yet the Bahá’í leaders have not languished in prison. Mahvash Sabet has written poetry inside her Evin cell, now published in English. Roxana Saberi, the Iranian-American journalist made famous in 2009 because of her unjust incarceration in Iran, shared a prison cell with Sabet and Kamalabadi. “They showed me what it means to be selfless, to care more about one’s community and beliefs than about oneself,” Saberi later said of the two women.

But the seven are living a daily grind of deprivation, overcrowded prison cells and exposure to the abuse of their captors. They have 15 years to go. The eldest among the seven, Khanjani, is 80 years old. His wife of more than 50 years passed away after his incarceration – he was unable to see her a final time or attend the funeral.

The plight of these seven Bahá’ís is emblematic of the state-sponsored persecution that has plagued the Iranian Bahá’í community for more than 30 years. More than 200 Bahá’ís were executed after the 1979 revolution. And the seven in prison are only the most well-known; there are more than 100 others behind bars. Bahá’ís are denied jobs in the public sector; their businesses are closed and property appropriated; and the entire community is subjected to waves of defamation and vilification in the state media.

A community is under siege: it is one of the most appalling examples of the persecution of religious minorities in Iran today. The Iranian government must respect the rights of all its minorities, release the seven leaders, and emancipate the Bahá’í community.

But the Bahá’ís have never been helpless victims of their tormentors. Iran’s government abuses them and countless others; the Bahá’ís respond with a peaceful determination to serve their fellow Iranians and offer a hopeful vision of the future.

Five years too many: government officials, faith leaders, human rights activists, artists; people of good conscience across the UK and around the world are standing up to support the Bahá’ís and all religious minorities in Iran. Five years are too many and 15 more is barbaric. Five minutes may do; just enough time to unlock the doors.

Iran actress sentenced to one year in jail: report

AFP: Actress Marzieh Vafamehr has been sentenced to a...

Annan to brief Security Council on Syria after talks in Iran, Iraq