Iran: New briefing reveals crackdown on dissent ahead of election 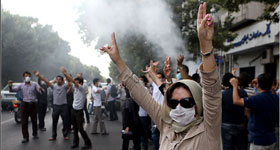 The briefing, Iran: Repression of dissent intensifies in run-up to presidential elections, documents dozens of arbitrary arrests and other human rights abuses in the run-up to election day, targeting journalists, political activists, trade unionists, advocates of greater rights for Iran’s religious and ethnic minorities, and students.

“The escalation in repression is an outrageous attempt by the Iranian authorities to silence critics ahead of the presidential election,” said Philip Luther, Director of Amnesty International’s Middle East and North Africa Programme.

“The surge in recent violations underlines Iran’s continued and brazen flouting of human rights standards through its persecution of political dissidents and betrays the glaring absence of a meaningful human rights discourse in the election campaign.”

Since the beginning of March this year, at least five journalists have been arrested in relation to their work, an apparent attempt to suppress freedom of speech. Two other journalists from the Mukrian News Agency, Khosro Kordpour and Massoud Kordpour, who are from Iran’s Kurdish ethnic minority, were arrested by security forces in the western region of Kordestan and detained without charge on 7 and 9 March, respectively.

A number of political activists and trade union representatives have also been arrested and harassed by the authorities in recent months.

On 1 June, some members of presidential candidate Hassan Rouhani’s campaign team were arrested following a rally during which members chanted slogans demanding the release from house arrest of former presidential candidates and opposition leaders, Mir Hossein Mousavi and Mehdi Karroubi. According to news reports the detainees are being held in solitary confinement at Tehran’s Evin Prison.

Dozens of political prisoners, including prisoners of conscience, who were arrested during widespread anti-government protests following Iran’s disputed 2009 presidential election, remain in prison. Four years on, the Iranian authorities have failed to bring to justice those responsible for the deaths of numerous people amid post-election demonstrations – instead, they have actively persecuted relatives of those killed in a bid to silence them.

Mehdi Karroubi and Mir Hossein Mousavi – both of them former presidential candidates – and Mousavi’s wife, Zahra Rahnavard, a political activist, have also been held under unofficial house arrest since February 2011, after they called for demonstrations in solidarity with anti-government protests in Egypt and Tunisia. Repeated calls for their release by the United Nations and human rights organizations have been ignored.

Mousavi’s two daughters, Zahra and Narges, were also briefly detained in February 2013 after calling for their parents’ release.

Members of ethnic and religious minorities have also been targeted with prison sentences – including members of Iran-based Azerbaijani advocacy group, Yeni Gamoh, and Iranian-American Christian pastor, Saeed Abedini.
Amnesty International has expressed growing concern that repressive measures are being used by the Iranian authorities to stamp out dissent under the guise of protecting the nation.

“The Iranian authorities must permit all individuals and groups to peacefully exercise their rights to freedom of expression, association and assembly, even when they express dissent from state policies and practices,” said Philip Luther.

“Those detained for doing so are prisoners of conscience and should be released immediately and unconditionally.”

Iran media subsidies to be based on loyalty: minister

AFP: Iranian newspapers will receive government aid based on...

AP: The Senate has overwhelmingly approved a resolution that...