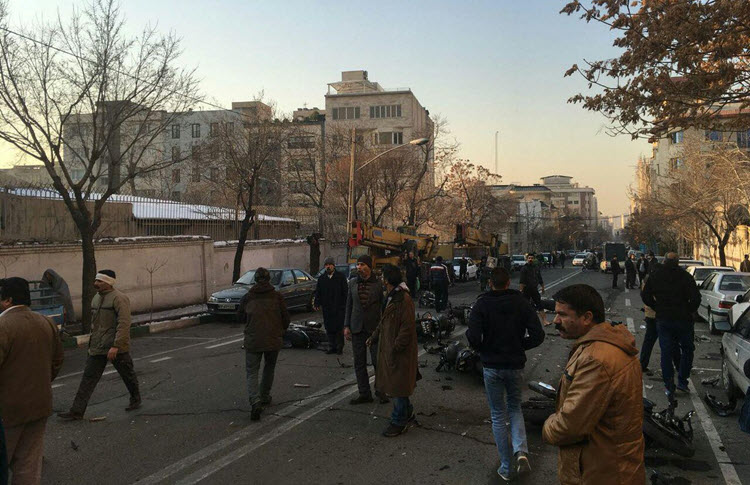 London, 06 Feb – On Sunday, security forces in Iran besieged the house of one of the most well-known leaders of Shiite Sufism. Noor Ali Tabandeh’s residence was quickly surrounded with his supporters who gathered peacefully to protest the injustice. This, however, led to clashes with the security forces who opposed their presence.

News about the incident spread quickly and before long videos and pictures were circulating on the internet and on social media applications.

A news agency that reports about Sufism said that Tabandeh’s residence was surrounded by his supporters. The Majzooban Noor website said that this was done to prevent the authorities from trying to build a checkpoint.

The Sufis in Iran have been victimised for many years now. The Sufi Gonabadi Order is part of Shiite Sufi. It was founded by the Iranian Sufi poet Sayyid Nurduddin Shah Nematullah Walliy al Mahani Karamani, also known as Shah Nimatullah Wali, who lived during the end of the 14th and beginning of the 15th centuries, or 8th and 9th century AH in the Islamic calendar.

In 2009, the Friday prayer Imam in the city of Isfahan issued a statement about the Sufis and this was followed by the destruction of the al-Darawish Nasser Ali in the of Takht-e Foulad cemetery in Isfahan. Before being destroyed by municipal bulldozers, goods were looted from inside the building.

After this happened, there were several protests carried out across the country by Sufi Gonabadi followers. Towards the end of that year, a large gathering of Sufi Gonabadis met in the Iranian capital city in front of the Iranian Shura Council. It was reported that around 60 people were arrested during this gathering.

Sufi Gonabadi teachings encourage followers to earn an honest living and to peacefully coexist with everyone from all religions. They are warned about the dangers of drug use and have no distinguishing features or dress codes that make them stand out.

There are many other minorities in Iran that continue to be supressed. Simply for their religion, many are arrested, tortured and jailed. Their religious sites and places of worship are often destroyed, raided or degraded by the country’s suppressive Basij forces and by the Islamic Revolutionary Guard Corps (IRGC).

Human rights organisations have repeatedly called on the Iranian regime to respect the minorities in Iran, but nothing ever changes.

The Iranian Resistance has condemned the recent attacks against the dozens of Dervishes that were injured by security forces. In a statement, the National Council of Resistance of Iran (NCRI), the main opposition to the Iranian regime, said that measures need to be taken to prevent further attacks from happening.

It said: “The Iranian Resistance Strongly condemns the brutal acts of religious fascism ruling Iran against the Gonabadi dervishes in Tehran and the aggression of the repressive forces against the residence of Dr. Nourali Tabandeh, the head Gonabadi Dervishes, at Golestan 7th Avenue. It also calls on all international human rights organizations to take immediate action for ending such repressive measures and for eliminating all restrictions and discrimination against dervishes.”

Election List Fragmentation and Overt Boycott by Iran’s People

Ahmadinejad to push for Asia cooperation at forums