Iran: The 129 People Arrested in Grand Bazaar Protests Will Not Be Released Soon 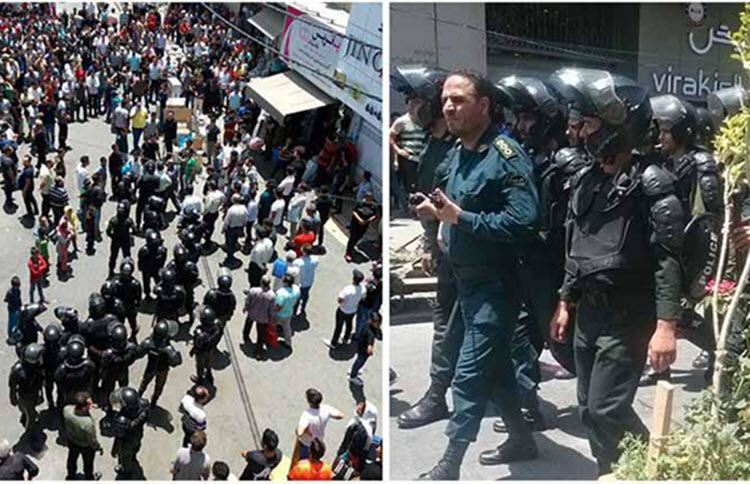 London, 3 July – On July 1st, IRNA, the government’s official news agency, cited Iranian legislator, Mohammad Javad Kolivand, as saying that 129 people were detained during the spontaneous protest rallies at the marketplace and outside the parliament building in Tehran. He also lauded the police’s success in establishing “security and peace in society”.

Abbas Jafari Dolatabadi, the city’s prosecutor-general, said that those arrested during the protests at Tehran’s Grand Bazaar on June 24th will not be released until their trial.

The protest rallies that began at several business complexes in the capital quickly spread across the city, leading to the closing of the Grand Bazaar on June 25th. Initially, the protesters chanted slogans against high prices and chaos at the bazaar, but the slogans soon became political demands, and condemnation of Iran’s domestic and international policies. Security forces fired teargas to disperse the demonstrators.

Chief Justice Ayatollah Sadeq Amoli Larijani has threatened the protesters with execution. He announced, “We will not hesitate to implement the law.” He also referred to a “disrupting the economic order” — a charge Supreme Leader Ayatollah Ali Khamenei also used to threaten protesting merchants.

Khamenei called on the Justice Department to “confront those who disrupt economic security” it a meeting with judiciary officials on June 27th.

Prosecutor General Dolatabadi stated, “I warn all those involved in business that, if found guilty of economic corruption, we will not hesitate to punish them.” He
dismissed the protest rallies as “riots” and “sedition”.

“We were facing riots and acts of sedition, not protests. Those who have burned police vehicles should be prosecuted and punished,” he said.

During the protests, police and security forces were photographed and videoed as they damaged shops. these images and videos were posted on social media. Four Tehran MPs — Elias Hazrati, Sohaila Jelodarzadeh, Parveneh Mafi, and Mahmud Sadeqi — issued an official note addressed to the interior minister, calling for the punishment of security forces involved in damaging private property and the compensation of losses.

Abdor-Reza Rahmani Fazli, the Interior Minister, admitted that some security forces had been involved in actions that resulted in damage. But, he said, according to the Commander of Police, “Security forces had to break windows to arrest suspects as firemen are forced to break into a place to control a blaze.”

Kolivand also argued, “Legislators and the people should understand that the police has to use all means when it comes to internal security and, fortunately, in the recent gatherings, the police showed its power by ensuring the people’s and merchants’ order and security.”

However, Ahmad Karimi Esfahani, the head of the Islamic Society of Tehran Guilds and Bazaar, affirmed the merchants’ “justified” complaints, saying that the people’s rightful economic demands should be met.

Iran’s judiciary and conservative allies of Khamenei have accused “hostile foreign governments” of provoking the demonstrations, just as the students who were arrested in anti-corruption demonstrations last December, and the people protesting a lack of drinkable water in Abadan and Khorramshahr, in southwest Iran, have also been described as “elements with connections” to “foreign enemies.”

AFP: Iran vowed on Monday to expand its uranium...