Nearly 200 Protests in Iran in August 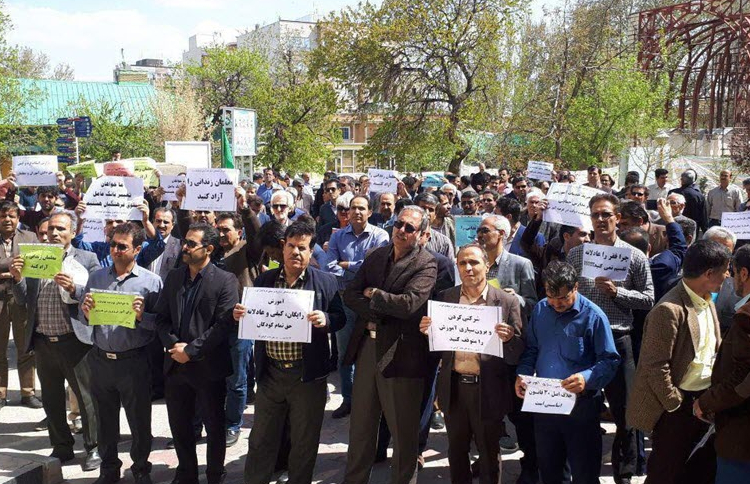 There were over 177 protests in 57 Iranian cities, villages and industrial regions during August, averaging at six per day, even as the Iranian authorities increased its suppression of workers, teachers and activists. Here we will look at some of those protests.

Iranian workers staged 83 protests in 29 different places, at an average of three protests per day. Most of them were protesting delayed wages, lack of job security, the dismissal of workers, the non-renewal of workers’ contracts, privatization, and low wages. Some of the most important protests were held by Shafavard Forest Company rangers, Sisakhat municipality workers, HEPCO workers, Fasa Sugar Cube factory workers, and RAMCO (Rehabilitation & Maintenance Petrochemical Co.) workers.

Teachers in Iran held 17 demonstrations across eight cities to protest low wages, dire livelihood conditions, unpaid wages, not being officially hired, the arrest of teachers, and other things. These protests were more organized than the previous ones and there were more of them since school restarted.

Pensioners, including retirees of  the Fars Province Telecommunications company, the Nilo Tile factory in Isfahan, the Isfahan Telecommunication Company, and the Tehran metro held six protests in four cities.

There were 38 other protests held in 28 cities, with most held in Tehran and including a number of large gatherings attended by people from across Iran. The most significant were landowners in Mahmoud Abad, Iranians with disabilities, and villagers in Hani Garmaleh.

There were also 13 prisoners who went on hunger strike across eight prisons in seven cities, with nonpolitical prisoners starting to use it as a way to express their grievances. The hunger striking prisoners include:

In addition, more than 21 activists who participated in various protests were sentenced to lashes and prison in August, according to Iran News Wire.

Reuters: A senior Iranian cleric said on Friday the...