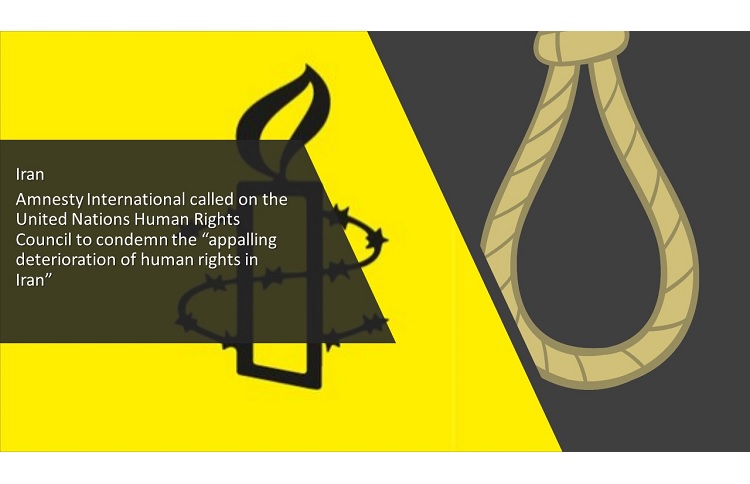 In a statement on Wednesday, Amnesty International called on the United Nations Human Rights Council to condemn the “appalling deterioration of human rights in Iran” in its next meeting on November 8.

“Iran’s upcoming UN human rights review session offers a crucial opportunity for the international community to send a strong and clear message to the Iranian authorities that its shocking disregard for human rights will not be tolerated,” said Philip Luther, Research and Advocacy Director for the Middle East and North Africa at Amnesty International.

The organization urged states taking part in Iran’s Universal Periodic Review (UPR) to denounce the widespread human rights violations and make concrete recommendations for the Iranian authorities to address them.

Amnesty had previously sharply criticized Iran over what it called the prolific use of “cruel and inhuman” corporal punishment including flogging, amputations, and forced blinding.

“From horrific execution rates to the relentless persecution of human rights defenders, rampant discrimination against women and minorities, and ongoing crimes against humanity, the catalog of appalling violations recorded in Iran reveals a sharp deterioration in its human rights record,” said Luther.

The statement continues: “It is also an opportunity for states to place increased attention on the ongoing enforced disappearance of thousands of political dissidents over the past three decades, a crime against humanity which has been overlooked for far too long by the international community.”

Amnesty International also stated: Thousands of people have been rounded up for expressing their views or taking part in peaceful demonstrations and a vindictive crackdown has been launched against human rights defenders, including activists campaigning against forced veiling laws, in order to destroy the last vestiges of Iran’s civil society.

The authorities have further eroded fair trial rights and have executed more than 2,500 people, including juvenile offenders, in blatant violation of international law.

Forasmuch as Iran is one of the main countries which is disrespecting and violating the rights of women Amnesty underlined: “As well as continuing to subject women and girls to discrimination in law and practice, Iran’s authorities have rejected ratification of the UN Convention on the Elimination of All Forms of Discrimination against Women and failed to criminalize gender-based violence, including marital rape, domestic violence and early and forced marriage.”

“Women’s rights defenders, including those who have campaigned against Iran’s discriminatory and degrading forced veiling laws, have faced arbitrary arrest, detention, torture and other ill-treatment, unfair trials and lengthy prison sentences. They have also faced harassment and abuse by pro-government vigilantes for defying such laws.”

The Times: Iraq’s Shia Muslim parties have formed a...