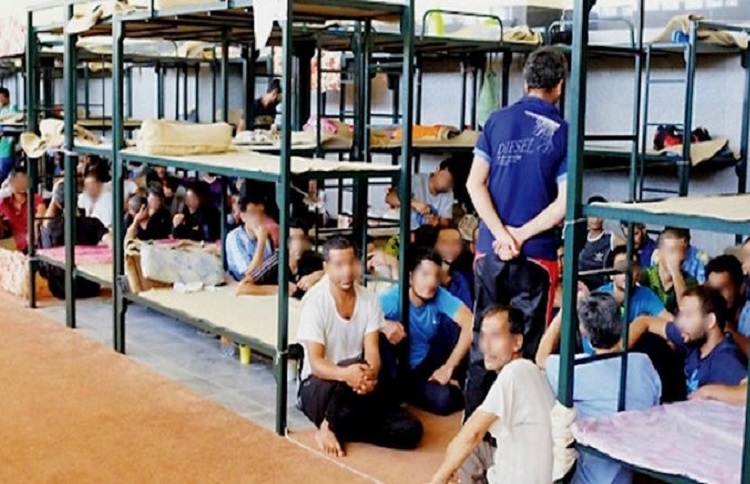 Every time someone or an organization says something about human rights violations in Iran, the regime responds by labeling them ‘liars’.

But sometimes the situation is so bad that the regime itself is forced to write about it. A few days ago, one of the regime’s media ‘the Etemad online’ wrote the disastrous situation in one of the regime’s prisons. The Greater Tehran Central Penitentiary is better known as “Fashafuyeh”. Below you can read the article’s translation:

The Greater Tehran Central Penitentiary, the prison of 13,950 sentenced

The Greater Tehran Central Penitentiary is the prison of 13,950 sentenced people because of corruption, rejection of property, theft, alcoholic drinks, fraud, smuggle, punishments, malversation, forging, transfer of other people’s property and acquisition of illegal property.

Prisoner “A” said: “The people come into this prison as small criminals and left is as a big one.” The prison has 5 sections. The prisoners call these sections “brigades”, like the prison officials who call the “cells”, “the place of advice”, and the “Hoosegow”, the penitentiary. But in this prison, no one gets any advice, nor they will repent.

In these units, the distribution of the primitive facilities does not follow any logic or criteria, like beds, fridges, TVs, and a washing machine. The only equal situation is the equal separation of the units to 3 and 16 rooms groups, and the distribution of the initial decor. In the groups with three-room units, every room has 24 beds, 6 WCs, and 8 bathrooms.

But this physical and structural being is not enough even for one-fifth of the prisoners. Despite the start of the construction in 2000, this prison was considered to be a place for 15000 prisoners with all facilities.

But now this 110-hectare prison is 20 years old, and the prisoners are reporting a prevalence of a lucrative business “bed dealing”, that with this number of bathrooms, you must wait one week for washing and bathing.

Prisoner “B” said that these 200 prisoners are forced to sleep side by side like books in a bookshelf. Prisoner “P” said: “bed dealing” is a prevalent phenomenon in all the sections of the prison. The total rate of bed deposit is 4 million Tomans. This is more common in the section of the financial convicts because in other parts of the prison the people are so poor that they can even not buy their daily mineral water.

The financial convicts’ section houses intellectuals, doctors, professors, and managers. We have here someone that all of his documents for becoming free are complete, but the judge did not let him go. We had here someone who spent 27 years in prison. He entered prison at the age of 40, and at the age of 67, he left this prison in a burial cover.

Living under the “force” of the bed, medicine, postage, bathroom, and the toilet mafia

Here exist all kinds of mafia. Mafia for beds, mafia for medicine, mafia for the postage, mafia for the bath, and of course for the toilet. The prisoner “TH” sometimes said that a mafia for the breathing in this prison is just left. The key to solving all the problems in this unpainted city is cigarettes.

And “J” said, to be able to go to the WC you must give 10 cigarette butts. For bathing, you give cigarettes, to boxes…

“CH” counted the “wonders” of this prison and said, the rats here are as big as the cats, which are walking on the fences and the telephone and power cables. And at night they are our guests. If you pay, you can get a mobile here. Here mobile phones are prohibited, but if you pay 15 million you can buy one.

If you have a good relationship, rent, and money and you spend a lot of money, you live comfortably here, otherwise, you are doomed to perish. Like the poor prisoners who beg for a loaf of bread because the government rations are limited in the prisons, and most of the prisoners are poor.

Currently, there are about 6000 prisoners in prisons who cannot afford to refuse property. Here are people just because of stealing 50 pieces of walnut, or a package of buttermilk, stealing a shoe rack, and for 500,000 Tomans of property rejection.

Scabies, flu, hepatitis, tuberculosis, and AIDS are rampant in the prison

But the whole prison is full of scabies, flu, hepatitis, tuberculosis, and AIDS because most of the prisoners are addicted. Everyone is depressed, psychotic, and insane, and relieve their pains with methadone.

There are many things here that should not be. According to prison regulations, the doctor, and the medical staff, must do daily visits of the prison, but in a section were 200 people sleep on the ground, how can this be done?

The doctor must visit 50 patients daily and that only with 260 variants of medicine. Medicine is sold by some of the medical staff for cigarettes.

Black market in the prison

All inmates have to go to the free air to smoke, but in units 1 and 4, they smoke in the unit and use drugs publicly there. You see it every hour of the day. Just for injection, they hide themselves in a corner. Dealing with drugs in these sections is an income for the prisoners. There is an injection (drugs) and syringe, and there are shared injections too. In these sections, all the prisoners are armed, with a sword, blade, or knife. Everything you think of, you can find there.

The prisoner “Th” said an Internet company installs telephone devices in all units, and you have to charge your phone card to make a phone call; a Smartphone card that stores only eight numbers. I stored my home phone numbers of, my mother, my children, my court, and my lawyer on my card. Phone use per person is only allowed for half an hour a day. Prison Library, the books are useless. In Units 1 and 4 there is no hot water and have bathroom limit. Unit 2 also lacks hot water because the heating system is old.

All our personal belongings are just one pair of trousers, a shirt and one pair of shoes for court hearings. When you move into the prison, they give you a blanket, towels, and shorts, and every 40 days they give each prisoner a shampoo, washing liquid, and 2.7 kilos of sugar as a prison diet. But you have to buy dishwashing liquid, toothbrush, toothpaste, and towels by yourself.

Prisoners in Units 1 and 4 (robbery and mischief) do not have money to buy towels and toothbrushes, and each towel is used by four people, or they even wear each other’s clothes. There are not enough workshops, so the prisoners are condemned to be unemployed from morning till night.

AFP: Iran said on Sunday it was firmly opposed...