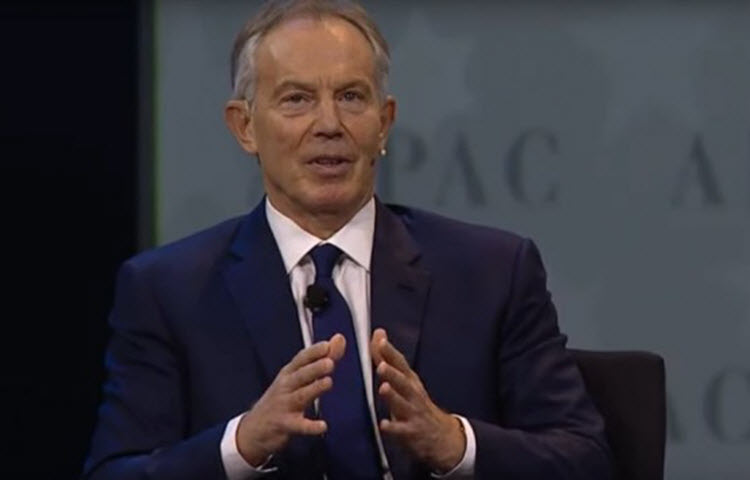 He said on Sunday that the Iranian regime is at the centre of the crises in the Middle East, emphasising that if Iran stopped interfering in the region, there would be a good chance of resolving conflict.

“If you had a benign regime in Iran, all of the problems in the Middle East would be resolvable.”

The Islamic Republic has had some sort of involvement or part to play in most of the conflicts in the Middle East. The Hamas terrorist group in the Gaza Strip is funded and armed by Iran, as are the Houthi rebels in Yemen. The terrorist group Hezbollah in Lebanon is controlled by Iran.

Most significantly, if it were not for the Iranian regime, the Syrian dictator Bashar al-Assad would have fallen from power long ago. Iran has been involved in the Syrian civil war since the beginning, and outside support – mainly from Iran and its proxies – is what is fuelling the war and has caused the deaths of hundreds of thousands of people.

Speaking about the threat of Iran, Tony Blair said that we need to “push back hard”.

Many experts believe that Iran needs to be dealt with aggressively and it appears that this is finally happening. After many years of appeasement by the former Obama administration, President Trump has been dealing with Iran firmly.

Even before being elected, Trump criticised Obama for his lenient treatment of Iran and he said that the Iran nuclear deal signed in 2015 was the “worst” deal and he vowed to scrap it. So far the deal remains intact, but Trump has reacted swiftly with regards to Iran’s aggressiveness.

It was revealed over the past few days that new sanctions legislation is being considered in a crackdown against the Islamic Republic. The support for the bill is strong and bipartisan.

To designate the country’s Revolutionary Guards (IRGC) as a foreign terrorist organisation will be a major blow to the Iranian regime.

Senate Foreign Relations Chairman Bob Corker said: “This legislation demonstrates the strong bipartisan support in Congress for a comprehensive approach to holding Iran accountable by targeting all aspects of the regime’s destabilizing actions.”

Potential investors to Iran will be put off by the designation, concerned about dealing with companies controlled by the Revolutionary Guards and this will result in a large blow to Iran’s economy.

Iran Regime Blames West for Terror Attacks in the UK