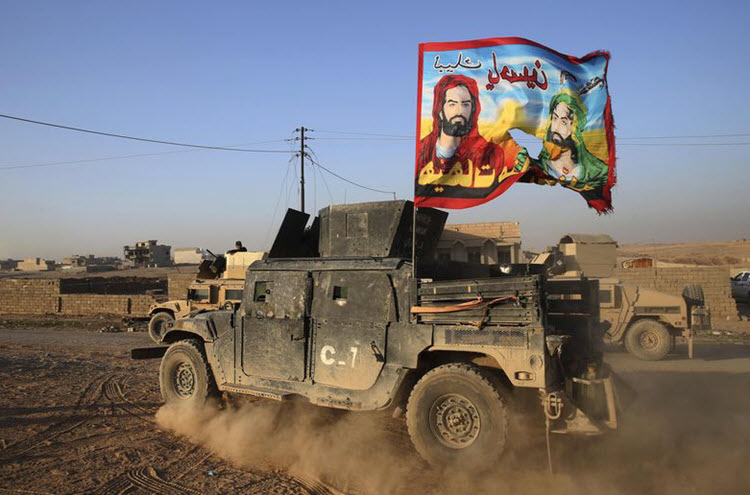 London, 2 May – While US-backed forces are driving the so-called Islamic State out of Mosul, the Iranian Regime is using the fight against ISIS to attack Sunni Muslims who are unrelated to the terror group. The idea being that they stop civilian cars at checkpoints in order to search for ISIS fighters and then harass the Sunnis inside.

This horrific move is likely to drive more Sunnis towards ISIS than away from it, as Kawa Hassan, director of the Middle East and North Africa Program at the Brussels-based EastWest Institute, explained to a European Parliament hearing in November. He said: “If they exact widespread revenge against the Sunnis and expel them, this might create a conducive environment for ISIS to come back.”

Of course, the Iranian Shiite forces in the area (known as the Hashd al-Shaabi, or Popular Mobilization Units (PMUs)) are fighting ISIS but rather than do it for the good of the people of Iraq, they are doing it in order to quietly expand their influence over Iraq.

In short, the Iranian Regime wants to take advantage of the power vacuum left by ISIS, when they are finally defeated.

Seth J. Frantzman wrote on the Washington Times, that many experts are worried that the Iranian PMUs will “inflame tensions” between the Sunni Arabs and the Kurdish population in Iraq and lead to further conflict, emphasising that Iraq is still very much divided along ethnic/religious lines rather than banding together to fight the terrorists. He notes that in Sunni villages fear of the PMUs is very real.

The PMUs also control access to the new United Nations camp at Hamam al-Alil, which remains largely unoccupied despite all of the people who are fleeing the war zone. It is believed that they are not opening the camp to Sunni Muslims.
In Frantzman’s article, he notes that a reporter who tries to enter the camp is stopped by militias in “black balaclavas and masks with skulls on them”.

For more evidence that the Iranian Regime is trying to divide people along religious lines, look at the people they have put in charge of their militias. Qais Khazali, who runs the Asa’ib Ahl al-Haq militia and attacked U.S. troops in Karbala in 2007, called the battle for Mosul “revenge” for the killing of Hussein (a historic killing that Shiite Muslims blame on Sunnis).

The battle for Mosul began in 2014 when ISIS fighters took over the city, expelling or excluding minority citizens like Christians and Shiites. As of last year, they had halved the populace of the city.

AFP: The US State Department has begun sending Twitter...