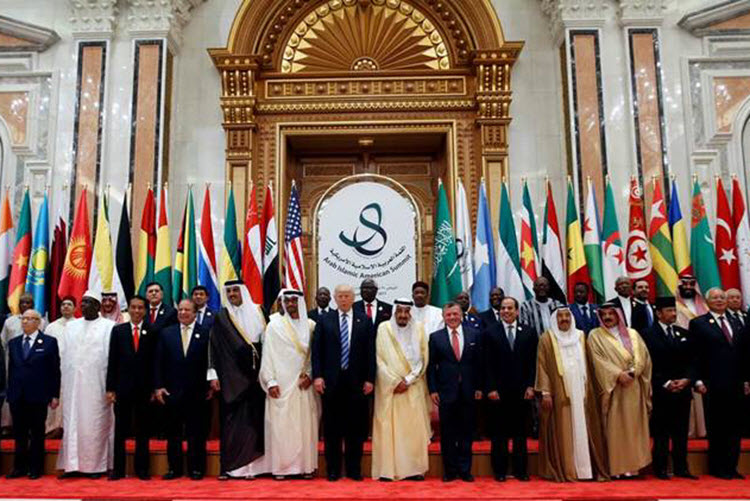 London, 24 May – When Donald Trump announced that his inaugural trip as President would be to Saudi Arabia, plenty of people were concerned about how he would fare, given his comments on the Saudi Royal Family in past years and his more recent comments surrounding Muslims.

There has been plenty of coverage surrounding Trump’s policy on banning Muslims from the US, a promise that he made on the campaign trail and attempted to enact once in office (his ban was shut down twice by US judges), so visiting a Muslim-majority country which was also a US ally was a smart move by his team. The benefits would be two-fold; showing that Trump was not Islamophobic and strengthening previous sour relationships with US allies.

However, Trump was received well in Saudi Arabia and at the Arab Islamic American Summit held in Riyadh, where he made clear that he sees Iran as a threat to peace in the middle east because of their support for terrorism.

Trump said: “No discussion of stamping out this threat would be complete without mentioning the government that gives terrorists all three—safe harbour, financial backing, and the social standing needed for recruitment… From Lebanon to Iraq to Yemen, Iran funds, arms, and trains terrorists, militias, and other extremist groups that spread destruction and chaos across the region. For decades, Iran has fuelled the fires of sectarian conflict and terror.”

Dr. Majid Rafizadeh, President of the International American Council and board member of the US-Middle East Chamber of Business and Commerce, wrote an op-ed for the Huffington Post, where he assessed that Trump’s comments reflected the shared goal of stamping out extremism and addressing Iran as the number one state-sponsor of terrorism.

Rafizadeh wrote: “It was a statement of policy long awaited in the Arab world and beyond. For too long, groups such as ISIS and Al-Qaeda have hoarded the headlines with their vicious massacres, bloody videos, and offensive rhetoric.

They were allowed to define the narrative as “Islam versus the infidels,” to the dismay and outrage of Muslims worldwide, instead of calling it what it is: terrorism, plain and simple.”

He continued: “This is not about Islam versus the West, or Arabs versus Persians, or Sunnis versus Shiites. It is about the civilised peoples of the world – of all faiths and cultures – joining together to defeat a barbaric, violent extremism that spreads destruction and chaos in the region, and brutalises civilian populations, most of whom are in fact Muslim. To do so, they must recognise that the heart of the leviathan beats in Tehran. That fact has been well known to the peoples of the Middle East for almost four decades.”

Trump also addressed that the group most persecuted by the Iranian Regime is the Iranian people themselves, whom he called “the Iranian regime’s longest-suffering victims”.

Maryam Rajavi, the President-elect of the National Council of Resistance coalition, welcomed Trump’s comments and called on the international community to confront the reality of Iranian Regime terrorism and fundamentalism.

She said: “The ultimate solution to the crisis engulfing the whole region is the overthrow of the velayat-e faqih regime.”

AFP: A French woman was detained in Iran last...