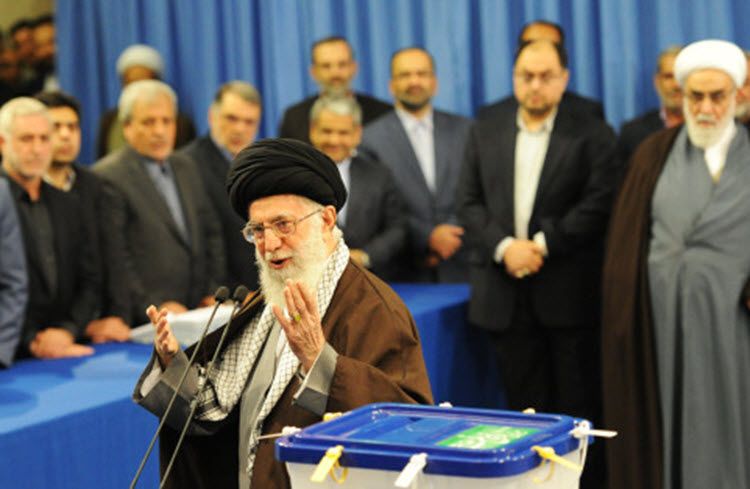 London, 25 May – Over the past couple of weeks, the Iranian Regime have suffered several humiliations from their failure to secure the President they chose in the recent ‘elections’, to the speeches made at the Arab Summits in Saudi Arabia, to a near defeat by the Syrian rebels, but could this be the end of the Regime and its dictator?

Mohammed Al Shaikh, a Saudi journalist, certainly thinks so. He wrote an op-ed for Al-Arabiya in which he declared that supreme leader Ali Khamenei is finally bowing to the pressures of the international community.

After all, Khamenei was so scared of an uprising by the Iranian people (similar to those seen after the 2009 election) that he could even bring himself to fix the election in favour of the candidate he wanted.

Granted, Al Shaikh does mistakenly refer to the opposing candidates in last Friday’s ‘elections’ as moderate (Hassan Rouhani) and hard-line (Ebrahim Raisi), when in fact, there is no such distinction in the Iranian Regime. The President’s power is merely symbolic and all decision-making power is held by the Supreme Leader, therefore no President can be a moderate.

The Iranian Regime has also been roundly criticised at the Arab Summit by many Middle Eastern leaders and the US President and Al Shaikh believes that Khamenei is realising that he cannot possibly take on that combined fighting force.

Although, it’s Al Shaikh’s words on Iran’s involvement in the Syrian Civil War that is possibly the most telling.

He wrote: “Iran’s top cleric also knows well that without Russia he is a paper tiger. Syria’s rebels humiliated him and almost defeated him although they were mere groups, mainly armed with light weapons. If it had not been for the Russian air force intervention, Khamenei and the mercenaries he brought into Syria from across the world would not have withstood the fight. Russia’s support is therefore necessary for this exhausted army that does not possess a single jet or air defence systems.”

Al Shaikh hints that Khamenei may soon have to agree to a truce in Syria, which would allow peace talks to take place, and that Khamenei may even sacrifice some of his ill-gotten gains in Lebanon, Iraq, Syria and Yemen, if he is faced with a united Middle East.

As mentioned above, it’s not only the Arab alliance that Khamenei is scared of, but his own people. Al Shaikh writes that given the diversity of Iran’s population (in spite of the way that the Regime treats ethnic and religious minorities) and the high level of suppression that all Iranians face, the time may be right for an overthrow of the Regime.

He wrote: “I think the Iranian street is ready to destroy its stability if the government goes far in its costly expansion, aggression and interferences in the affairs of other countries.”

AP: The European Union has condemned the death sentence...

The Times: A CANADIAN woman photographer who died in...