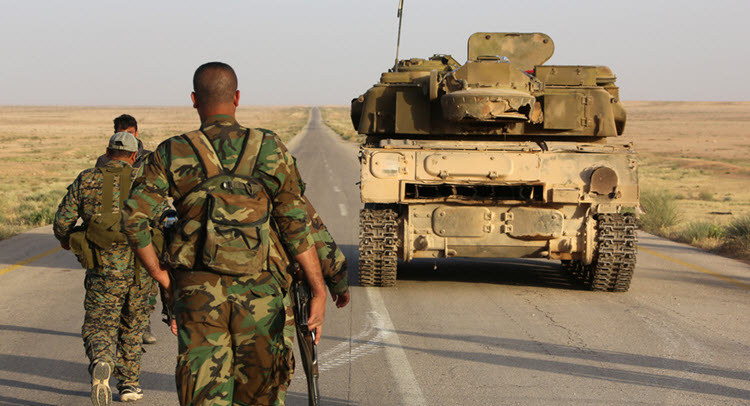 London, 25 Oct – Syria and Iraq are currently seeing a huge shift due to rapid political developments out of Iran (who are controlling the Iraqi government and helping the Bashar Assad dictatorship to massacre their own people) and the USA (who are working with the Syrian opposition and the Iraqi Kurds in order to defeat ISIS).

One of the biggest and most recent developments is the withdrawal of the Peshmerga (Kurdish) forces from the Kirkuk region in Northern Iraq, when it was announced that Iraqi troops (backed up by Iran) were heading to reclaim the disputed area after the Kurdish Independence Referendum. There were even accusations that the Jalal Talabani Kurdish group were working with the Iranian Regime (against their best interests) in order to gain control over the other Kurds.

However, it is difficult to determine what lies ahead for the Kurds as many in the Middle East are still focusing on the very real danger of ISIS and the escalating war of words between the USA and the Iranian Regime over Iran’s non-compliance with the 2015 nuclear deal, support of terrorism, and ongoing destabilisation of the Middle East.

While Donald Trump is trying to change US policy on Iran and the Iranian Regime are trotting out all of their leaders to deny any wrongdoing, no one knows what the future holds but one thing is clear: the people of the Middle East want the violence to end.

Dr. Talal Al-Harbi wrote on Riyadh Daily: “We do not wish the region to plunge into a new spiral of violence. It has had enough violence since the Iraq war in 2003 and the civil war in Syria for more than five years. What we hope for is the Iranian leadership listening to reason and reading the new writings on the wall.”

There is no reason for the Iranian Regime to believe that it can hold its own against the United States and its attempts to do so will only further destroy the Middle East.

Even if Europe, Russia, and China could not be convinced to stand against a Regime that is the world’s largest state sponsor of terrorism based on the moral cause, they would surely be encouraged to do so for economic reasons. The USA is, after all, the larger and more stable economy.

Additionally, Russia is also upset about Iran’s interference in Syria and it’s role in prolonging the Syrian Civil War and Israel- a common Iran target- would be eager to assist the USA in its fight against the Regime and its terror proxies.

While Saudi Arabia is the only Middle Eastern country that is seriously working to contain Iranian expansionism, it is likely that others will soon join if a war begins.

Al-Harbi wrote: “Iran will find itself alone, its options of response limited and its internal front disjointed. The dream of exporting the revolution, which only carried ignorance, poverty and ruin, will end in a whimper.”

Why Iran has the upper hand in the nuclear showdown

Iran arrests ‘a number’ of Bahais

AFP: A number of Bahais who were "promoting their...