AFP: The lack of a government in Iraq nearly five months after general elections is “embarrassing” and is impeding any long-term decision-making, Foreign Minister Hoshyar Zebari told AFP on Thursday. 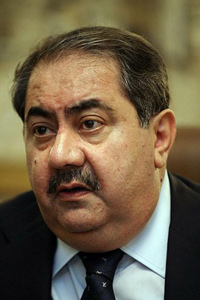 BAGHDAD (AFP) — The lack of a government in Iraq nearly five months after general elections is “embarrassing” and is impeding any long-term decision-making, Foreign Minister Hoshyar Zebari told AFP on Thursday.

Zebari said the government had begun to “drift” and had consequently not taken strategic decisions, adding that he had avoided several foreign visits because he could not explain to other countries why no new government has yet been formed in Baghdad.

“It’s embarrassing, to be honest with you, for me, and I have avoided a number of foreign visits,” Zebari said in his office in the newly refurbished foreign ministry building in central Baghdad.

Both, however, fell short of a parliamentary majority, and negotiations over assembling a coalition with other parties appear to have stalled.

“There is nothing you can say or explain, although it is a difficult path — this is a transitional period, it is difficult to explain to your foreign audience” why no government has yet formed, Zebari said.

He said he found it difficult to detail “why all these delays, why all this bickering … why your leaders cannot get rid of their self-interest, selfishness, look at the general interest of the country and so on.”

“Britain had some problem, they solved it in five days, for instance,” he added, referring to coalition negotiations in Britain following its May general election which resulted in no conclusive victor.

He insisted, however, that “a deep thinker” would realise Iraq’s long period of post-election negotiations were not out of the ordinary, referring to the five months between its last parliamentary elections in 2005 and a government eventually forming.

“We must stop this drift. The government is working, it is functioning. It is not purely a caretaker government. At the same time, it doesn’t take serious strategic decisions — major agreements, major contracting, war and peace.”

Asked whether many such decisions had been taken since the start of the year, he replied simply: “No.”

A parliamentary session scheduled for Tuesday, only the second since the elections, was postponed indefinitely, with representatives of the various parties noting that no agreement had been reached.

Zebari said no government would form before the holy Muslim fasting month of Ramadan, which begins in mid-August, and would only say “hopefully” when asked if one would be in place by October.

“But if September and October come and there is no government, it will be bad for everybody,” he said.

“You have (the) 31st of August, the date of the withdrawal (of US combat troops from Iraq). Until then, if you don’t have a government, it doesn’t look good, you know?”

Some 65,000 US troops are currently stationed in Iraq, with that number set to drop to 50,000 by the end of August, when all American combat troops are set to leave.

Under the terms of a US-Iraqi agreement, all American soldiers will leave the country by the end of 2011.

A History of the Iran-Iraq War: Part 1 Khomeini’s Interest in Iraq

By Ehsan Qaraee In this series of articles, I...