Reuters: Saudi Arabia wants to play a bigger role in Iraq to counter Iran’s growing influence during a political stalemate in Baghdad, and to help Saudi companies to catch up with regional rivals in opening up the Iraqi market. 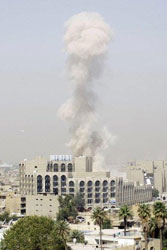 BAGHDAD, Aug 2 (Reuters) – Saudi Arabia wants to play a bigger role in Iraq to counter Iran’s growing influence during a political stalemate in Baghdad, and to help Saudi companies to catch up with regional rivals in opening up the Iraqi market.

But Riyadh, a bastion of Sunni Islam, is hoping that Iraq’s Shi’ite Prime Minister Nuri al-Maliki does not make a comeback after inconclusive elections created a power vacuum,believing that he is too close to the Shi’ite leadership in Tehran.

“The Saudis feel that Maliki is a man of Iran,” said Saudi political analyst Khaled al-Dakhil. “It seems to me the king does not want to open an embassy as long as Maliki is there. He’s waiting for another prime minister or government.”

The world’s top oil exporter is trying to contain the regional influence of Iran, which has clout among majority Shi’ites in Iraq, and shares U.S. concerns that Tehran wants to develop nuclear weapons, a charge Tehran denies.

“Now with the American withdrawal coming closer, the Saudis will want to make sure the Iranians do not make any strategic, tactical or political gains,” said Theodore Karasik at the Institute for Near East and Gulf Military Analysis in Dubai.

Saudi Arabia has already signalled that it wants to become a more active player in its northern neighbour and fellow oil producer, diplomats and analysts say.

Riyadh has entertained a series of Iraqi visitors and allowed direct flights between the two countries after a 20-year break, while trade has picked up.

According to Iraqi media, both sides are discussing a security agreement — Riyadh fears that al Qaeda might send fighters over their remote 812 km common border, which Saudis have also used to join militants.

Saudi Arabia and Iraq agreed to resume diplomatic relations, which had been broken following the 1990 Iraqi invasion of Kuwait, after the fall of Sunni dictator Saddam Hussein in 2003. But ties have been frosty as Riyadh has had trouble adjusting to the emergence of a Shi’ite-led government in Iraq.

Riyadh has rebuffed U.S. calls to open an embassy in Baghdad, even after Iraq sent an ambassador in 2009, or forgive huge loans made to Saddam to fund his 1980-88 war with Iran.

But the staunch U.S. ally might normalise ties with Baghdad if the next Iraqi government is not headed by Maliki, Saudi-based diplomats and analysts say.

Saudi Arabia is worried about the failure of Iraqi parties to agree a new government since parliamentary elections on March 7 produced no outright winner, while the United States withdraws troops and bombings still occur regularly, diplomats say.

Since the March election King Abdullah and other top Saudi officials have received Iraqi politicians to signal a possible normalisation if the next cabinet is not headed by Maliki, is not close to Iran and if Sunnis have a say in it, diplomats say.

Saudi Arabia has said publicly it will reopen its embassy in Baghdad once security allows it to, but officials have repeatedly made clear their dislike of Maliki.

“As far as the Saudis are concerned it all depends if Maliki stays or not. If he’s gone and the next government is less pro-Iran there is a game change,” a Western diplomat said.

Maliki and Allawi both claim the prime minister’s post with talks dragging on between Shi’ite, Sunni and Kurdish lawmakers.

Some diplomats say Saudi Arabia might try exploit an apparent weakening of Iran by new U.N sanctions by using its economic might and offer economic aid.

A thaw in relations would open the door for Saudi firms spending billions of dollars on regional expansion to explore an untapped country of 30 million where players from Turkey, the United Arab Emirates and Iran are making inroads.

Interest of Saudi firms is picking up. In July, a Saudi airline launched the first direct flights for almost 20 years.

Products of Saudi food firms such as Almarai are sold in Iraq, though most exports go via Kuwait or Jordan as the only land border crossing is closed, making Saudi goods more expensive than more dominant Turkish ones, analysts says.

Judge awards $2.2B for Beirut attack on Marines