AFP: The US Senate has unanimously confirmed career diplomat James Jeffrey to be ambassador to Iraq, replacing Christopher Hill, as the president has vowed to end combat operations there. 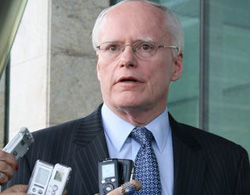 WASHINGTON (AFP) — The US Senate has unanimously confirmed career diplomat James Jeffrey to be ambassador to Iraq, replacing Christopher Hill, as the president has vowed to end combat operations there.

Jeffrey had served as the current US ambassador to Turkey, a NATO ally that has seen its usually warm ties with Washington frayed over Ankara’s tensions with Israel and opposition to US-backed sanctions on Iran.

Before being appointed to his post in Ankara, Jeffrey served as deputy national security advisor and assistant to the president at the White House under George W. Bush’s administration.

His resume also includes several previous stints in Baghdad and across the Middle East, unlike Hill, who was best known for his high-profile post as the Bush administration’s point man on North Korea’s nuclear program.

When Jeffrey’s nomination was announced in late June, a senior State Department official told AFP on condition of anonymity that Hill “is retiring,” but declined to comment further.

He was previously dispatched to the Balkans, where he served as US ambassador to Albania.

Jeffrey was also a US Army infantry branch officer from 1969 to 1976, and served in Germany and Vietnam.

Reuters: Saudi Arabia is not negotiating with Iran to...

AP: The European Union will not send a traditional...