Wall Street Journal: Senior Iraqi politicians involved in forming a new government said they are weighing the creation of a new federal position that could break the nearly-six-month logjam over which faction gets the coveted premiership. 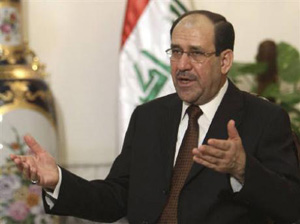 BAGHDAD—Senior Iraqi politicians involved in forming a new government said they are weighing the creation of a new federal position that could break the nearly-six-month logjam over which faction gets the coveted premiership.

Since March elections, the two top vote-getting blocs have failed to secure the majority needed in Parliament to form a government. Politicians from some of the biggest factions have warmed to the idea of creating an executive post they hope would better balance out power between the two sides, said people taking part in negotiations.

These people said the idea was floated during negotiations months ago, but that it went nowhere until American officials put forth a concrete proposal during Vice President Joseph Biden’s July visit to Baghdad.

Hoshyar Zebari, Iraq’s foreign minister in the current government led by Nouri al-Maliki, compared the talks to a game of musical chairs.

Mr. Zebari is one of the lead negotiators for the Kurds, seen as American allies and kingmakers in the current tussle. Mr. Zebari said the creation of the new position was high on a list of fresh Kurdish demands sent last week to all contenders to the premiership.

The proposal appears to have gained broader traction in recent weeks because more U.S. officials are saying they believe the only way to end the impasse is to push Mr. Maliki, whose bloc won 89 seats in Parliament, and his rival, former Prime Minister Ayad Allawi, with 91, to form the core of the next government. Neither has been able on his own to muster a coalition of the minimum 163 seats required to form the government.

A U.S. official said Washington was helping the two sides reach an agreement “on governing principles and modalities,” adding that Washington isn’t “dictating terms.” Jeffrey Feltman, the U.S. assistant secretary for Near Eastern affairs, arrived in Baghdad over the weekend in a bid to push talks forward.

The new post would head a “council on national strategy,” whose members include the prime minister and his two deputies, key ministers, the president, the two vice presidents, the speaker of Parliament and the president of the northern semiautonomous Kurdish region, among others, said people involved in the negotiations.

Since the 2003 U.S.-led ouster of Saddam Hussein, Iraq’s political factions have been split largely on ethnic and sectarian lines. In the previous government, Mr. Maliki inherited the plum job of prime minister. At the time, he represented a broad Shiite coalition that swept previous polls.

The looming deadline for the withdrawal of all U.S. combat troops, on Aug. 31, and a recent surge in violence has complicated efforts to form a government, with various factions blaming the others for inciting violence or doing too little to quell it.

Two people were killed and five wounded on Sunday when a minibus hit a roadside bomb in Baghdad, while a police officer was killed when a bomb placed inside his vehicle detonated, a security official said. This came a day after two policemen, asleep in their patrol vehicle, were shot and killed and then set on fire.

The weekend attacks were the latest in a brazen campaign of violence targeting Iraqi security forces, including traffic police.

Meanwhile, gunmen robbed four commercial ships anchored near the southern oil hub of Basra in a rare attack off the Iraqi coast, the Associated Press quoted the U.S. Navy as saying Sunday.

With the U.S. winding down its combat mission here, insiders and outside observers are increasingly viewing sectarian- and ethnic-based political clashes as an extension of the interests of countries seeking to maintain a strong influence here, including Washington and Tehran.

Osama al-Nujaifi, a Sunni Arab leader in Mr. Allawi’s bloc, known as Iraqiya, said American officials have been pressuring his group to relinquish the prime minister’s post to Mr. Maliki, in favor of the new position and key ministries in the next government. U.S. officials declined to address Mr. Nujaifi’s comment.

Mr. Nujaifi said Iraqiya would continue to resist this scenario, insisting the premiership was Mr. Allawi’s electoral right. He warned that Sunni insurgents in Baghdad and northern and western Iraq, where Mr. Allawi won the most votes, would be emboldened if Iraqiya were to lose the premiership.

“The extremists will take the initiative if the politicians fail,” he said.

Meanwhile, Khalid al-Asadi, a leader in Mr. Maliki’s State of Law bloc, said the security situation would deteriorate if the premiership didn’t revert to Mr. Maliki.

Tehran is pushing for another Shiite-led coalition headed by Mr. Maliki, but the biggest obstacle to that ambition is deepening fissures among Shiite parties, said several Iraqi politicians. Iran’s new ambassador to Iraq denied any meddling in Iraq’s domestic politics.

The Iraqi National Alliance, or INA, a Shiite umbrella slate separate from Mr. Maliki’s, controls a parliamentary bloc of 71 seats and has tentatively said it was willing to join forces with Mr. Maliki to form a new government. But it has also adamantly refused to back him for another term as prime minister.

The INA recently suspended government-formation talks with Mr. Maliki and launched a separate track with Mr. Allawi’s bloc. A powerful faction headed by anti-U.S. cleric Muqtada al-Sadr, which controls 40 of the INA seats, is also opposing Mr. Maliki for a second term.

Amir al-Kenani, a leader in Mr. Sadr’s faction, said the INA was still committed to a Shiite-led coalition that would include Mr. Maliki’s bloc but exclude him from the prime minister’s post. Mr. Kenani warned that the U.S.-backed proposal to create a new federal job was “unconstitutional” and would only complicate things further.

—Munaf Ammar
contributed to this article.

Is the U.S. kowtowing to Iran in nuclear talks?

Washington Post: The most interesting public result of the...