McClatchy Newspapers: After a “very frank” exchange with Iraqi Prime Minister Nouri al Maliki, a prominent House Republican announced Friday his subcommittee is investigating whether forces under Maliki’s command had committed a “crime against humanity” when they killed 35 Iranian dissidents at a camp north of Baghdad on April 8. 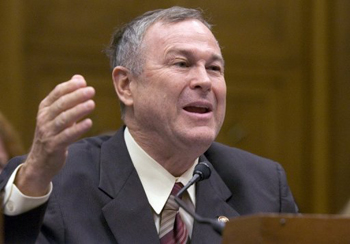 BAGHDAD — After a “very frank” exchange with Iraqi Prime Minister Nouri al Maliki, a prominent House Republican announced Friday his subcommittee is investigating whether forces under Maliki’s command had committed a “crime against humanity” when they killed 35 Iranian dissidents at a camp north of Baghdad on April 8.

It is highly unusual for a congressional committee on an official visit to another country to announce an investigation of the host government’s actions on its own territory, and it’s equally rare for an official delegation to be told to leave. In effect, Rohrabacher’s move propelled an incident that the U.S. Embassy and State Department had sought to play down into a dispute between the two countries.

Rohrabacher made no effort to cloak his intentions behind diplomatic language when he met reporters at the U.S. Embassy. “We are investigating to see if criminal behavior caused the death of these noncombatants,” Rohrabacher said after an hour and 40 minute meeting with Maliki.

“The killing of unarmed people, whatever your goal is, a mass killing like that, an intentional killing of unarmed civilians, is a criminal act, a crime against humanity, and we are on a fact-finding trip to see some of those details,” said Rohrabacher, who chairs the House Foreign Affairs subcommittee on Investigations and Oversight.

Rep. Russ Carnahan, D-Mo.,, the ranking Democrat on the subcommittee, stood alongside Rohrabacher as he spoke, as did four other members. Only one of the six, Rep. Jim Costa D-Calif., said there were “differences” within the delegation about the importance of the Camp Ashraf incident in relation to other issues.

The Iraqi government also rejected Rohrabacher’s other request during the meeting that “once Iraq becomes a very rich and prosperous country” it would give “some consideration” to “repaying the United States some of the mega-dollars we spent here the last eight years.”

Iraqi spokesman Dabbagh said: “Thank you very much for liberating Iraq, but sorry, you’re not going to get a cent.”

In an interview, Rohrabacher said: “At no time did we have any indication that the prime minister was angry at us for quizzing him about (Camp Ashraf).” Neither the U.S. ambassador nor the senior Embassy official who accompanied the delegation to Erbil mentioned that the government had asked them to leave. But later Rohrabacher said: “Maybe he got mad at us afterwards for being so impudent …”

The April 8 assault, which Rohrabacher said had left 100 people wounded, was the latest in a series of efforts by the Iraqi government to force an end to the presence of the 3,500 Iranian militants, who fought the Iran’s theocratic rulers from Iraqi soil under Saddam Hussein and were stranded when the 2003 U.S. invasion toppled the dictator.

Known as the People’s Mujahedeen of Iran, or MEK by its Farsi language initials, the group has been on the U.S. terrorism list for over a decade, despite an enormous political and legal effort by the MEK to have it removed.

The raid had a military purpose, for it shrank the size of “Camp Ashraf,” where the group had been living on for many years, by about a third, according to U.S. officials.

The attack has drawn the condemnation of many top former U.S. national security officials, many of whom have been paid speaker’s fees well-into five figures by the Paris-based MEK, according to MEK officials.

Rohrabacher asked for permission for the delegation to visit Camp Ashraf, but said the Iraqi government refused.

He said if the U.S. is concerned about the fate of the MEK members, “we would urge them to host them in the U.S. or in other countries.”

Early last month, a high-ranking U.S. official visited Camp Ashraf and proposed that the Iranian dissidents be moved to another location within Iraq, but the MEK leadership in Paris rejected the proposal as equal to being sent to a concentration camp. Dabbagh said Friday that the government could order this move if it chooses.

“Whenever the Iraqi government will decide to move them to a better place, it will be implemented,” he said. “Until now, there is no decision on this.”

Poe told reporters that he was “deeply disappointed” that access to Camp Ashraf was denied. He called for de-listing the MEK from the U.S. list of foreign terrorist organizations.

Gohmert said the questions the subcommittee hopes to answer included whether someone ordered U.S. troops — who’d been at Camp Ashraf until the eve of the Iraqi army assault, to leave, and “who ordered the killings.”

Costa told McClatchy that the assault on the MEK was “an important issue,” but had been problematic for years. “Certainly the loss of lives, as we told the prime minister, needs to be responded to, and there needs to be an investigation as to what takes place.”

But he said the bigger issue was whether the United States and Iraq would be successful at the “task at hand” — to make sure the transition from U.S. to Iraqi forces is successful, for Maliki to complete the appointments in his government, and for his government to succeed.

“That’s the bigger picture to me as opposed to an investigation of this incident,” he said.

The Independent: President George Bush is expected to use...