No resolution on US troops in Iraq, Iran threat seen

Reuters: Washington has not given up on trying to secure a deal to keep U.S. military trainers in Iraq beyond the end of the year, as it frets about what it calls Iranian meddling in the region, U.S. officials said on Monday. 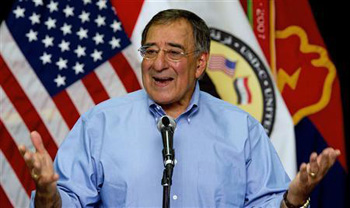 WASHINGTON, Oct 17 (Reuters) – Washington has not given up on trying to secure a deal to keep U.S. military trainers in Iraq beyond the end of the year, as it frets about what it calls Iranian meddling in the region, U.S. officials said on Monday.

Defense Secretary Leon Panetta said American and Iraqi officials were continuing discussions that might permit U.S. soldiers to stay in Iraq beyond the Dec. 31 deadline for ending the American military presence more than eight years after the U.S.-led invasion to oust Saddam Hussein.

As the deadline draws near for pulling out all but a few hundred of the remaining 40,000 troops, some reports have suggested the Obama administration has abandoned its effort to secure a deal that would keep troops — possibly thousands of them — to remain to train and advise Iraqi forces.

For months, Iraq’s fractured political elite has been at odds over whether American soldiers should stay as trainers. Baghdad rejects any legal immunity for U.S. soldiers, and Washington says that means no deal.

“There is no drop-dead date at this point,” Panetta told reporters at the Pentagon. “We’re continuing to negotiate.”

Panetta’s spokesman, George Little, said a “broader mission remains on the table for discussion … beyond the Office of Security Cooperation.”

Iraqi Prime Minister Nuri al-Maliki last week said U.S. troops could stay on as part of the small NATO mission or as part of an already existing U.S. embassy military training program — the Office of Security Cooperation — which would give American troops legal protections.

The country’s political leadership gave Maliki the green light to negotiate, but without immunity — a sensitive matter that would have required tricky horse-trading within his fragile cross-sectarian government and could possibly lead to defeat in parliament.

American officials however are unlikely to authorize their soldiers to stay without at least partial immunity.

Little said the U.S. desire to keep the trainers in Iraq was based in part on a threat seen emanating from neighboring Iran.

“Regardless of the question of troop presence, we are going to be working closely with the government of Iraq because we remain very concerned that Iran is meddling, not just in the affairs of Iraq but of other countries in the region. And that’s unacceptable,” Little said.

Washington and Tehran have long been at odds over Iran’s nuclear program, the alleged role of Iranian militants in Iraq, and other issues.

Azerbaijan, stuck between U.S. and Iran