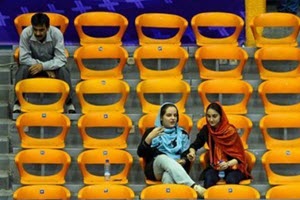 London, 14 October – An article published in The Human Rights Watch on October 13 advises The International Volleyball Federation (FIVB) that they should not award Iran the right to host FIVB international tournaments unless female spectators can freely attend volleyball matches in that country.

In a letter to Ary Graça, the sports federation’s leader who was re-elected as the FIVB’s president at the sports federation’s 35th World Congress this week in Buenos Aires it was pointed out that in July 2016, the organizers of FIVB World League volleyball matches in Tehran appeared to continue to obstruct the ability of women to purchase tickets and attend, in an apparent violation of the  “fundamental principle” of nondiscrimination supported by FIVB.

The FIVB is expected to announce the host of the 2017 World League, the most important tournament in volleyball, in the coming weeks, and Iran is competing again to host it.  “Iranian volleyball authorities broke their promises to make tickets freely available to women during the World League matches in July and suffered no consequence,” said Minky Worden, Director of Global Initiatives. “Awarding Iran yet another World League tournament would only embolden the authorities in their discriminatory policies that sideline women.”

Repeated concerns have been communicated by the Human Rights Watch to the FIVB, both in writing and in person at meetings at the FIVB headquarters in Lausanne.

Human Rights Watch asked for a formal investigation into the exclusion of female spectators from a February 2016 tournament on Kish Island in a May 2016 letter to Graça.  An investigation should also examine the restrictions imposed on women spectators during the July 2016 World League.

the FIVB’s Persian-language website claimed that capacity “had already been reached” for seats reserved for women at Azadi (“Freedom”) Stadium in Tehran, before tickets to the July World League tournament had even gone on sale, and that “spectators who purchased tickets of [the] opposite gender will not be allowed into the stadium.”

Although the FIVB promised that women would be allowed to buy tickets, and some women were photographed in the stadium, other photos show that most of the seats reserved for women were empty.

The Persian language news site Tabnak News Agency reported that these tickets were not put on sale to the general public. Those seats were reserved for wives of Iranian officials or female Iranian officials, Iranian female athletes, and wives of foreign diplomats.

“Despite its pledge to end discrimination in the stadiums, the Iranian volleyball federation appears to have constructed a system that denies most women any opportunity to attend matches,” Worden said. “The FIVB should make clear that Iran will not be able to host international volleyball competitions until the Iranian federation makes good on its promises.”

Since 2012, women have not been able to purchase tickets to volleyball matches in Iran. In June 2014, law student Ghoncheh Ghavami and several other women were arrested when they attempted to attend a Volleyball World League match at Azadi Stadium. Most were released soon thereafter, however, Ghavami was rearrested, charged with “propaganda against the state,” and held in Evin Prison, and spent time in solitary confinement, for nearly five months.

The FIVB assured Human Rights Watch and the Iranian public, in February 2016, that, Iran’s first beach volleyball tournament, the Kish Island Open, would “be open to fans from all age groups and genders.”  Instead, Iranian women who spoke to Human Rights Watch, domestic news reports, and Twitter posts, said that they were told entry was “forbidden” and were turned away based on their gender.

Iran’s men’s volleyball team played in the Olympics for the first time, last August. Several Iranian women went to Brazil to see their national team. Many of them held banners protesting Iran’s ban on women attending matches inside their county.

“The FIVB should insist that the Iranian volleyball federation ensure that women can freely attend volleyball matches in the country, Human Rights Watch said. The FIVB should also develop and publish a plan to address the discrimination, and tell the authorities that Iran will not be welcome to host future international tournaments until women spectators are freely able to attend,” writes the Human Rights Watch.

“The FIVB may want to build the sport of volleyball in Iran, but embracing gender discrimination and ugly double standards is no way to go about it,” Worden said.