Washington Post: As Iran exerts its considerable influence in Syria and around the region, it is meeting resistance from an unlikely source: Iraq’s polarized and faltering democracy.
The Washington Post 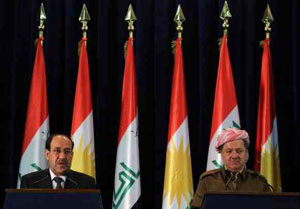 BAGHDAD — As Iran exerts its considerable influence in Syria and around the region, it is meeting resistance from an unlikely source: Iraq’s polarized and faltering democracy.

Iraqi Prime Minister Nouri al-Maliki, who once sought refuge in Iran as an exile, has officially maintained his neutrality while his eastern neighbor has thrown its full support behind the Syrian regime. Out of political necessity, he also recently has made significant efforts to build alliances with moderate Iraqi Sunni groups, offering a hint of cross-sectarian cooperation in a region increasingly defined by a religious divide.

“Our Iranian brothers do not like it,” said a close adviser to Maliki, speaking on the condition of anonymity because of the sensitivity of the subject.

Sectarian rivalries across the region have combusted in the heat of the Syrian civil war, and Iraq has been caught in the middle. Iraq’s Shiite majority lives mainly in the eastern part of the country, closer to Iran, which has supplied weapons and fighters to Syrian President Bashar al-Assad. Iraqi Sunnis, who compose about one-third of the population, live mainly in the west and north, closer to Syria, where the overwhelmingly Sunni rebels have received support from Turkey, Saudi Arabia and Qatar.

The Shiite-led Iraqi government has avoided taking sides, at least overtly. Many leaders worry that a new regime in Syria would be hostile to Iraq, but they are more concerned about minimizing domestic unrest. And although the government has looked the other way while Iran has shuttled arms to Damascus through Iraqi airspace, it also has responded to diplomatic pressure from the United States by inspecting some flights and refraining from giving more direct support.

“A military solution is not a solution” to the Syrian conflict, said Ali Musawi, a spokesman for Maliki.

Still, Iraq has been deeply affected by the conflict, with Iraqi militant groups fighting on both sides. Al-Qaeda in Iraq has formally allied with extremist rebel groups in Syria, while Iraqi Shiite militias that are backed by Iran have deployed fighters to defend the Assad regime.

And the turmoil has spilled into Iraq, which recently suffered its three deadliest months in five years, fueling fears of a return to the sectarian civil war that consumed Iraq in 2006 and 2007. Energized by the fight across the border, Sunni militant groups have stepped up attacks. They also have taken advantage of discontent among the Sunni population, in some cases infiltrating otherwise peaceful demonstrations.

In response to this upheaval, Maliki initially seemed to take advice from Gen. Qassem Suleimani, the Iranian Revolutionary Guard Corps commander who runs Iran’s operations in Iraq and Syria. Iran funnels millions of dollars to Shiite political candidates in Iraq, and it also has funded, trained and equipped Shiite militias. Iraqi politicians say it is common knowledge that the Iranian Embassy is a Revolutionary Guard headquarters, with the ambassador reporting to Suleimani.

Through intermediaries, Suleimani has encouraged Maliki to play the role of “the Shiite defender” by cracking down on Sunni dissent and exploiting sectarian splits to secure a unified base of Shiite support, according to the Maliki adviser. In April, security forces reporting to the prime minister raided a Sunni protest in the northern city of Hawijah, killing at least 50 people. The incident sparked a chain reaction of reprisal attacks, bombings and sectarian polarization.

“Hajji Qassem has so many people here and so many ways of communicating,” said the Maliki adviser, referring to Suleimani with an affectionate honorific. “The sectarian politics is used for political power.”

Since Iraq’s provincial elections in April and June, however, the political landscape appears to have shifted. Hardheaded political calculations might now be driving Maliki, who faces reelection next year, to take a less sectarian approach.

Most important, Maliki no longer appears to have the support of a unified Shiite base. His party lost ground in the provincial elections, and rival parties gained control of the local governments in Baghdad and Basra, the most important city in the southern oil fields. But in the restive Sunni-majority province of Anbar, more than one-third of the votes went to parties loosely aligned with the prime minister — a sign that, despite the protests, Maliki could potentially partner with moderate Sunnis to form a governing coalition.

“There will be a political settlement with a segment of the Sunni community,” said a second close adviser to Maliki, Sami al-Askari, who is a member of parliament.

“This was a radical compromise,” said Kirk H. Sowell, a political analyst and editor of Inside Iraqi Politics.

The viability of Maliki’s potential Shiite-Sunni alliance ultimately depends on many factors outside the realm of politics. Militant groups are increasingly active in Iraq, and their attacks are often designed to break open political fissures along sectarian lines. Most visibly, al-Qaeda affiliates have targeted security forces and civilians in Shiite areas.

Shiite militias, largely dormant in recent years, have remobilized for the fight in Syria, and there are many signs that they receive funding and direction from Iran’s clandestine Quds Force. Relatives of militia members, who would speak only on the condition of anonymity, said that fighters typically travel to Syria via Iran and that the bodies of those killed generally return by the same route.

If Shiite militias fully revive their domestic operations, Iraq could quickly spiral deeper into violence. During the civil war of 2006 and 2007, they carried out kidnappings and executions, used death threats to intimidate Sunnis into fleeing mixed neighborhoods and infiltrated government security forces.

Maliki appears to be trying to keep them at bay, at least inside Iraq. Some groups, including many followers of the cleric
Moqtada al-Sadr and the militia Asaib Ahl al-Haq, have ostensibly put down their weapons and rebranded themselves as political groups, although they have also sent fighters to Syria. Maliki has used intermediaries to deliver warnings.

“The message is clear: ‘You are a political group, and you are not to participate in any violence,’ ” Askari said. “Their reply has been, ‘We are committed to this.’ ”

In recent weeks, however, gun battles have broken out in Baghdad as rival Shiite militias scuffle over turf. Iraqis warn friends about rumors that militias wearing police uniforms have set up fake checkpoints, screening cars for potential kidnapping victims. Families gather at funerals to mourn the fighters who have returned from Syria in coffins. And Iraqi leaders admit the limits of their influence.

“We discourage any involvement in violence,” Askari said. “But they aren’t asking us to give permission.”

Reuters: The civil war in Syria is widening a...