Scoop: Cross-Party MPs and Peers on Tuesday urged Prime Minister Cameron and Foreign Secretary Hague to urgently press the Government of Iraq to release seven Iranians at risk of forcible extradition to Iran and allow for United Nations protection for 3,000 Iranian dissidents in Camp Liberty, Baghdad. 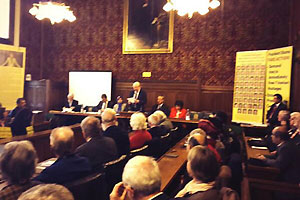 Cross-Party MPs and Peers on Tuesday urged Prime Minister Cameron and Foreign Secretary Hague to urgently press the Government of Iraq to release seven Iranians at risk of forcible extradition to Iran and allow for United Nations protection for 3,000 Iranian dissidents in Camp Liberty, Baghdad.

The call was made at a Parliamentary conference as Iranians outside the US embassy in London take part on day 101 of an international hunger strike demanding UN protection for Camp Liberty residents.

Iraqi forces under the command of Prime Minister Nuri Maliki carried out a massacre at Camp Ashraf on 1 September, handcuffing and killing 52 Iranian dissidents, including six women, and taking seven others hostage.

David Amess MP said: “There have been five deadly attack on camps Ashraf and Liberty by Nuri Maliki’s Special Armed Forces since 2009, leaving 112 residents killed and more than 1,300 injured. At least 16 residents have lost their lives due to the medical siege on Ashraf and Liberty. The UN must launch an independent investigation mission into the crimes committed on 1 September and bring to justice the perpetrators of this crime against humanity”.

Brian Binley MP said: “The seven hostages are being held by Maliki’s forces in Baghdad under torture. It has been 101 days that hundreds of brave Iranians have been on hunger strike demanding their freedom. On the basis of international law and the ‘Responsibility-to-Protect’ principle, it is time for Prime Minister Cameron and Foreign Secretary Hague to contact Maliki and demand that he releases the hostages immediately”.

Lord Clarke of Hampstead said: On behalf of the British Parliamentary Committee for Iran Freedom, which enjoys the support of the majority of the members of the House of Commons and more than 250 members of the House of Lords, I would like to express our gratitude to the Government of Albania for accepting 210 refugees from Camp Liberty in Iraq and we hope that the Albanian Government ould kinly consider taking 200 or 300 more from Camp Liberty. It is very important that the People’s Mojahedin Organisation of Iran (PMOI, MEK) has guaranteed to take full responsibility of all the expenses of these refugees.

Steve McCabe MP said:”Prime Minister Cameron must make it clear to the government of Iraq that if the seven Ashraf hostages are not released or if they are handed over to the Iranian regime in violation of international law, their foreign aid and bilateral relations will be suspended”.

Dr Matthew Offord MP called on the UN to station a monitoring team accompanied by Blue Helmet Forces at Camp Liberty on a permanent basis until all residents are relocated to third countries, and they demanded that Iraq provide without any further delay the security requirements for Camp Liberty including the T-Walls, safety vests, hard-hats, medical supplies and equipment, double-layered roofs, permission for construction, and expansion of Liberty’s area.

The MPs and Peers also warned that Iranian President Hassan Rowhani was insincere in his claims of ‘moderation’, pointing to a report by Amnesty International that 400 executions had been carried out in Iran since he took office. The Parliamentarians said domestic unrest and international sanctions forced the regime to agree to the recent nuclear agreement in Geneva; however, they warned, the agreement gives Tehran the opportunity to continue with its deception since it can continue uranium enrichment at 5 percent, the Fordow and Arak sites have not been shut down, the Additional Protocol and snap inspections have not been put into place, and inspections of the Parchin site have not been accepted.

Dowlat Nowrouzi Representative of the National Council of Resistance of Iran in UK, said: “Sanctions and isolation have weakened the regime and they should remain in place for as long as the regime fails to adhere to nuclear protocols or abide by the IAEA’s demands. Give the regime more time and sooner rather than later we will be facing a nuclear armed fanatic and ruthless regime in Iran. … Any leniency, hesitancy and concessions by the international community will prompt Supreme Leader Khamenei to once again move towards manufacturing nuclear weapons through deception and cheating”.

The Parliamentarians said that full implementation of UN Security Council resolutions, particularly a complete halt to uranium enrichment, agreeing to the Additional Protocol and IAEA inspectors’ unhindered access to suspected nuclear centres and facilities are essential for the regime to abandon nuclear weapons, and they urged Western governments to maintain the pressure of sanctions to achieve this goal.