Iran News Update: Maryam Rajavi, the president-elect of the National Council of Resistance of Iran spoke before the Canadian parliament on Thursday and asked it to initiate an independent international investigation into recent killings carried out by the Iraqi government at the behest of Tehran. 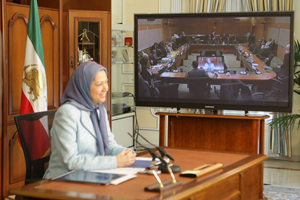 Maryam Rajavi, the president-elect of the National Council of Resistance of Iran spoke before the Canadian parliament on Thursday and asked it to initiate an independent international investigation into recent killings carried out by the Iraqi government at the behest of Tehran. Rajavi highlighted several separate incidents in which government agents targeted communities comprised of exiled members of the Iranian opposition group, the People’s Mojahedin Organization of Iran, (PMOI/MEK).

Speaking from her organization’s headquarters in Paris, Rajavi testified via satellite before the Foreign Affairs Subcommittee on International Human Rights. The testimony coincided with the Canadian parliament’s “Iran Accountability Week.” In addition to calling for the protection of political dissidents, she addressed the broader patter of human rights violations that have continued within Iran under the presidency of Hassan Rouhani.

3,000 members of the MEK currently reside in a temporary encampment called Camp Liberty, after having been removed from their original community, Camp Ashraf following the departure of American forces from Iraq. According to Rajavi, 116 residents have been killed by Iraqi forces at the two locations, and 1,350 have been injured. In addition, seven were taken hostage following the last assault on Camp Ashraf and are still in custody.

In her testimony, Rajavi argued that these attacks constitute a foreign extension of the repressive activities occurring within Iran. “The religious fascism ruling Iran, engulfed by political, economic and international crises, considers PMOI/MEK as the most serious threat to its rule,” Rajavi said.

20 residents of Camp Liberty have lost their lives due to a medical blockade by Iraqi forces, and several missile attacks have been launched against the community, which is overcrowded and contains no protective walls or bunkers in which residents can take shelter. The worsening security situation in Iraq puts these people at greater risk in its own right. The close relationship between the Shia government of Iraq and its masters in Tehran makes the situation even worse for them.

Living conditions are reportedly terrible in Camp Liberty. Two reports by the UN Working Group on Arbitrary Detention have described it as a prison. Residents have no freedom of movement, are denied the right to have family visits or meet with lawyers and are under medical blockade. Property and infrastructure that belonged to these people during their 30 years at Camp Ashraf have been denied to them by the Iraqi government.

Rajavi emphasized in her testimony that the first step in redressing this situation is an independent international investigation into recent killings, in particular the massacre of 52 residents and abduction of seven on September 1, 2013. Rajavi called on the Government of Canada to initiate such an investigation by the relevant international authority.

She also warned that to prevent another Srebrenica, the international community must provide security for the residents so long as they are in Camp Liberty, by stationing international observers and a unit of Blue Helmets in the camp.

“By offering financial and logistical support for such an initiative, the Government of Canada can remove all obstacles and excuses,” Rajavi said. “Violation of the residents’ human rights is part of the ongoing human rights violations in Iran. Families of the 3000 Liberty residents in Iran are also suffering, as many of them have been arrested, abused, some executed and a number of them are on death row.

She went on to urge the government of Canada to play an active role in relocating residents by accepting some of them into its own borders, while also contributing to the cost of relocation of willing recipients such as Albania.

Regarding the overall human rights situation in Iran, the Iranian opposition leader underscored that the regime has intensified suppression because it feels more vulnerable. According to Rajavi, despite claims of moderation by the regime’s president, there have been more executions over the past year compared with any other year in the past 25 years.

57% back a hit on Iran if defiance persists

Los Angeles Times: Despite persistent disillusionment with the war...