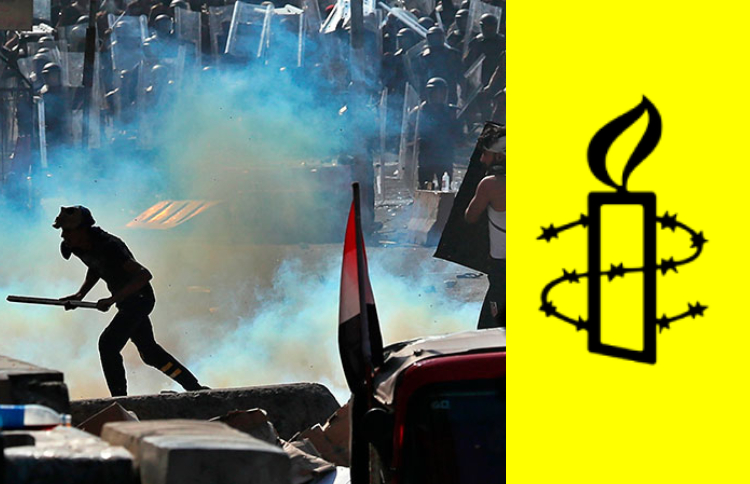 Since the unrest began last month, more than 260 protesters have been killed by security forces who have used live ammunition, rubber bullets and tear gas to quell the protests.

Amnesty International called it a “bloodbath” and said Iraqi authorities should immediately rein in security forces.

“The government of Iraq has a duty to protect its people’s right to life, as well as to gather and express their views. This bloodbath must stop now, and those responsible for it must be brought to justice,” said Heba Morayef, Amnesty International’s the Middle East and North Africa Director.

Amnesty International has called on Iraqi authorities to rein in security forces, amid anti-government protests that left scores dead.

“Iraqi authorities must immediately order an end to this relentless, unlawful use of lethal force,” Morayef said in a statement.

“There have now been at least 264 protester deaths across the country in little over a month. This is turning into nothing short of a bloodbath – all government promises of reforms or investigations ring hollow while security forces continue to shoot and kill protesters,” she said.

The London-based rights group said it has documented at least nine cases of military-grade teargas and smoke grenades killing protesters in Baghdad since Oct. 25.

More than 300 people have been killed and thousands injured in anti-government demonstrations throughout Iraq since Oct. 1, according to the Iraqi High Commission for Human Rights.

Popular anger has been simmering in Iraq in recent years due to rising unemployment, rampant corruption and Iran’s influence over the Iraqi government. Many residents have limited access to basic services such as electricity and clean water.

Iraq’s youth unemployment is at around 25%, according to World Bank figures. It is also the 12th most corrupt country in the world, according to several organizations that monitor transparency.

Oil-rich Iraq is OPEC’s second-biggest producer, but one in five people live in poverty, and youth unemployment stands at 25%, the World Bank says.

In the southern city of Nasiriyah, security and medical officials said 31 people were injured in confrontations outside the education directorate as security forces tear-gassed protesters trying to block employees from reaching the building in the city center. Among those wounded were two school students, they said, speaking on condition of anonymity in line with regulations.

Iran had a direct influence in this bloodbath, while Qassem Soleimani, the commander of Iran’s Revolutionary Guards Quds Force and field commander in charge of Iran’s operations in Iraq, has been in Baghdad for 11 days to manage the crisis and provide direct support to Iraqi Prime Minister Adel Abdul Mahdi.

The Iranian general, or Abu Duaa, as his closest allies call him, attend almost daily meetings in Baghdad with leaders of Iranian-backed political forces in an attempt to dismantle the crisis and prolong the time Abdul Mahdi remains in office.