Iraqi Prime Minister’s Resignation – An End or a Powerful Beginning? 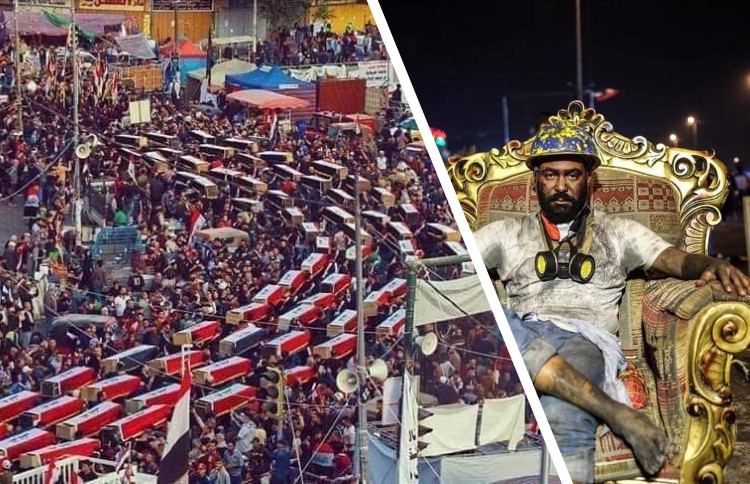 The well-known slogan “Al-Sha’ab Yorid Esqat al-Nezam” (People demand regime overthrow) along with “Iran bara bara” (Iran expelled), has been heard since the first day of demonstrations by Iraqi people and rebellious youth in Iraq.

The combination of these two slogans can be seen as a mirror image of the wishes of the Iraqi people because they target both corruption and government crimes as well as the root of the problem, the influence of the Iranian government in Iraq.

The Iranian regime’s endless support for its mercenaries in Iraq

In recent years, in face of popular protests in Iraq, the Iranian regime has repeatedly thrown its full support behind its cohorts in the Iraqi government. And this time again, Tehran did not hesitate to cover the costs of propping up its allies in Baghdad, whether political, military or economic.

In the political field, the entire hierarchy of power in Iran support the ‘Iraqi government‘ in the Friday prayer ceremonies. Various government and military officials in Iran have been campaigning against the protesters in Iraq as long as they could and lied about the situation and the people of Iraq while saying that the rioters are backed by powers outside of Iraq and that there are hidden hands behind the uprising.

In the military field, even though they made every effort not make any mistake, Iranian officials failed; even the police chief reported during the Arbaeen period said that anti-riot forces will be sent to Iraq. Immediately, however, they tried to cover up their mistake.

But beyond all this denial, the news of IRGC Quds Force chief Qassem Suleimani’s direct presence in Iraq was enough to make any observer aware of the extent to which the Iranian regime fears about the fall of its beloved government in Iraq. In fact, the Iranian regime supreme leader Ali Khamenei did his best to stabilize the structure of power in the Iraqi government, which was collapsing under the pressure of public protests and demonstrations.

Protesters’ vigilance and another defeat for the Iranian government

The usual way of dictators is that, depending on the social atmosphere and the level of pressure and demands of the people, they are forced to sacrifice one of their right-wing and pawns, such as low-level managers or police officers.

But given the magnitude of the protests in Iraq, these insignificant scapegoats were not enough. It came to the point that the government of Adel Abdul Mahdi also sacrificed General Jamil Shamri, a known agent of the Quds Force, to clean up its hands from the blood of the defenseless people who were killed in Nasiriyah. But this didn’t rescue the Iraqi Prime Minister, and the angry people continued to resist.

Finally, after two months, despite the demands and insistence of the Iranian regime to preserve the prime ministerial seat, Adel Abdul Mahdi resigned, and after the parliament’s approval, the protesters celebrated for the first time.

The Iranian regime and its influential elements in Iraq’s power structure are deliberately seeking to replace the prime minister’s seat with another suitable person of the same ilk. The regime hoped that, with the overthrow of Adel Abdul Mahdi, now that the demands of the protesters have been reached, they will leave the streets and let the elites make the decision for the thousandth time. They announced the return of “peace”, but the Iraqi people, who wanted a radical change, remained in Tahrir Square and added to their resistance.

On October 5, the ” October Revolution Protest Organizing Committee” in Iraq issued a statement warning that “they will not be satisfied with the removal of Adel Abdul Mahdi’s faction.” The statement described Abdul Mahdi’s dismissal as “a maneuver” and “fair game” with which corrupt parties want to “cover up their heinous crimes”.

According to the statement, the committee also stated that the demonstrators demand “dissolution of parliament and the presidency”, “block the constitution” and “put an end to the Iranian regime’s interference”, calling for the formation of a national rescue government of the Iraqi people and revolutionary youth. The statement also concludes that the protesters demand “the trial of the corrupt and criminal elements who committed the worst crimes against the Iraqi people in the past 16 years.”

It’s Iran, stupid — how to guarantee US credibility remains after Syria crisis

Fox News: It has become conventional wisdom that the...