Deutsche Welle: After months of uncertainty, there finally is a date for the Syria peace conference, but the guest list remains unclear. Despite its role in the Syrian civil war, the US does not want Iran to attend peace negotiations. 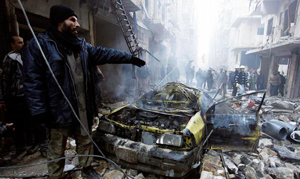 After months of uncertainty, there finally is a date for the Syria peace conference, but the guest list remains unclear. Despite its role in the Syrian civil war, the US does not want Iran to attend peace negotiations.

For months, Russia and the United States have been the driving force behind preparing the Syria peace conference. Time and again, the actual date has been postponed with either the government in Damascus or the opposition threatening not to take part.

The first meeting is to take place on January 22 in Montreux, Switzerland. The goal is to put an end to the civil war and the bloodshed that so far as cost the lives of more than 120,000 people. The list of attendees though does not include a delegation from Iran as a number of the other participants didn’t want Tehran to be part of the talks.

Arms and training from Iran

Yet Iran is a central player in the war between Syrian President Bashar al-Assad and the rebels. Günter Meyer, head of the Centre for Research on the Arab World at Mainz University told DW that Tehran had a key role in the war in Syria. “Without the support from Iran, Assad would have had no chance to stay that long in power.”

Among the reasons for the strategic partnership between Iran and Syria is a 2006 mutual military support agreement the countries signed. In that light, Iran was employing “all its resources to keep Assad in power,” Meyer said.

According to US intelligence, Iran is supplying arms to Syrian troops. Whether or not Iranian troops are actually fighting on the ground in Syria, has remained unclear, Meyer explained. But he said Tehran had sent elite troops from its Republican Guard to Syria to train Assad’s men for the fight against the rebels. There also were indications that Iran was training Iraqi soldiers who would then fight on the side of Assad, Meyer added.

Iran “part of the solution”

“Iran is part of the problem in Syria and has significant influence on the government in Damascus,” Volker Perthes, Middle East expert and director of the German Institute for International and Security Affairs, told DW. That’s why it was important that there would be an Iranian delegation taking part in the Switzerland peace conference.

“If you want that someone who’s part of the problem to become part of the solution, you have to include him. Tehran’s participation is important for the success of such a conference,” Perthes told DW.

That’s also the way the Iranian government sees the situation and Tehran has offered to mediate in the conflict, said Iranian Foreign Minister Mohammad Javad Zarif.

“Should all sides be interested in a pragmatic solution of the war, then Iran should participate in the conference,” he added.

It’s particularly the United States and Saudi Arabia that object to Iran joining the talks. “Saudi Arabia is determined to topple Assad,” Perthes said. The Gulf state was the largest supporter of the opposition in Syria confirmed Meyer of Mainz University.

Also the US does not want Iran to participate in the negations in Switzerland. Perthes said, however, Washington might show some flexibility on that point. This assumption is backed up by the fact that with the new Iranian President Hassan Rouhani, the relations between the US and Iran have begun to gradually improve. Meyer said he believes Obama would do “everything in his power to achieve a peaceful solution.”

Iran has a powerful supporter in its bid to be allowed at the table: United Nations Secretary General Ban Ki-Moon has personally spoken in favor of Tehran. “Iran can play an important role, the country is an important regional power,” Ban said. Including Tehran was therefore “logical, practical and realistic.”

Meyer and Perthes both see that despite that all the differences between Iran and the other countries involved, there is an increasing common interest to prevent radical Islamist groups in Syria from gaining even more strength. In that respect, Iran, Saudi Arabia, the United States and also Russia and Europe have a common enemy. For Iran, this fact could increase the chances to attend the Swiss conference after all.