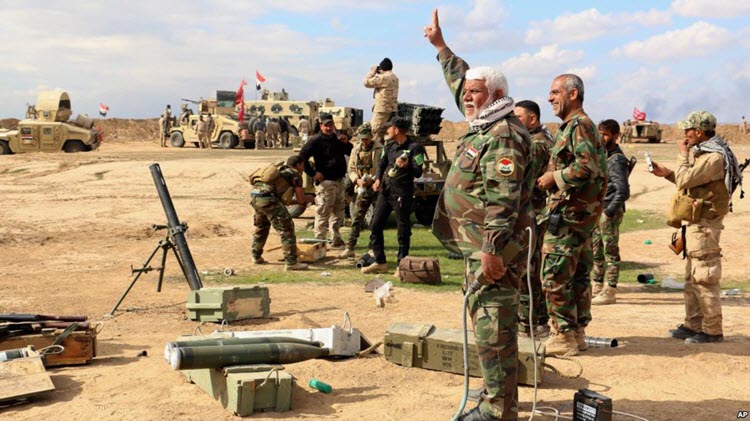 London, 23 Nov – Iran may be placing its Shiite militia fighters around Mosul to fight ISIS (Islamic State) for now, but their end goal is to maintain a fighting force within Iraq so that they can more easily attack other countries in the Persian Gulf, according to analysts.

It includes: The Hezbollah Brigades, designated a terror organisation by the US, is part of these forces. They were responsible for the deaths of hundreds of US personnel during the first Iraq war.

They are led by the Revolutionary Guard Corps’ notorious Quds force, another terrorist organisation, which now controls around 80,000 fighters in the region. The US believe that Tehran intends to dominate the region and halt American influence.

Patrick Martin, a military analyst with the non-profit Institute for the Study of War in Washington, said that the militias were fighting separately from the government’s Iraqi Security Force (ISF).

Martin said: “Perhaps the most notable thing is that almost every Iraqi Shia militia is participating or is trying to participate in operations near Mosul in order not to be left out, as participating in Mosul operations and recapturing Tal Afar are huge for the legitimacy of the Popular Mobilization Force.”

He added: “There’s a very big push among the most senior militia leaders to enshrine the Popular Mobilization Force as a permanent security force. It would effectively allow the individual leaders to have a lot more say and access to resources and a sense of legitimacy in a way they’ve never really experienced before.”

Iranian media portrays the fight to recapture Mosul positively, claiming that they are cutting off exit routes so that IS cannot escape and that they are helping the Iraqis to take control of IS-held areas.

There are massive fears, as reported by The Washington Times, that when Mosul is reclaimed from IS, the group will turn on the other Middle Eastern countries.

Michael Rubin, an expert on Iran at the American Enterprise Institute, said: “[Iran’s leaders] believe they can win on a number of fronts.”

He continued: “Controlling the region between Mosul and the Syrian border will allow Iran greater ability to supply Syrian proxies by land. Then there’s ideology. We look at Iran through a sectarian lens, as representing Shiite Muslims. It’s important to recognize that, from Iran’s point of view, the Islamic republic represents all Muslims, so from Tehran’s perspective, why shouldn’t they be in Mosul?”

He added: “If the Iranians have a greater presence along the length of Iraqi Kurdistan, they can also be spoilers in case the Iraqi Kurds ever do seek to separate. That’s a precedent Iran fears given its own ethnic diversity.”