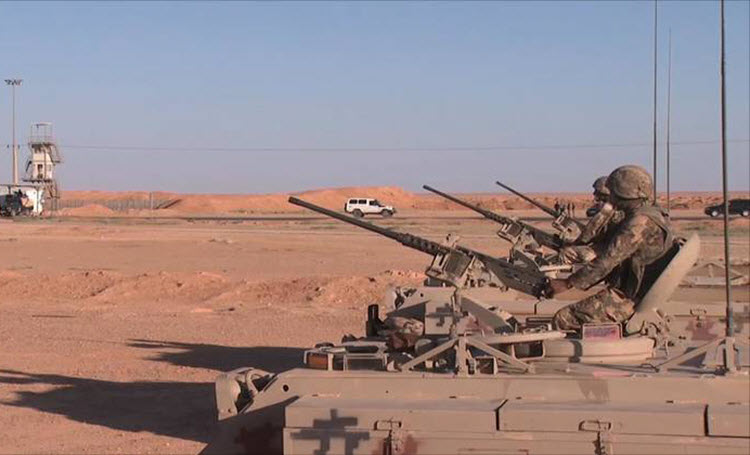 London, 7 Jun – Following the expulsion of the so-called Islamic State from a corner of south-eastern Syria, tensions have been rising between the Iranian Regime and the United States over a small patch of highway, which contains a US military garrison and a border crossing.

According to the US military, both the US and Russia have deployed warplanes and fired shots.

The garrison on the highway, which was captured from ISIS over a year ago, is still of use to the US and their allies because they are training Syrian militias to fight ISIS, so that eventually the US can pull out.

According to Nicholas Blanford of the Christian Science Monitor, it also helps to contain the Iranian Regime’s attempts to control and dominate the Middle East.

The Regime wishes to establish a Shiite Crescent which stretches from the Persian Gulf to the Mediterranean and in order to do that, they must control at least four countries; Lebanon, Iraq, and Syria.

The highway, which links Iraq and Syria, would be an integral part of the Iranian Regime’s operation and would allow them to traffic troops, weapons, and money through all four countries without the worry of border police.

Given the Iranian Regime immense support of terrorism, this could easily lead to a growth in terror cells in other Middle Eastern countries and destabilise the Middle East and the world as a whole.

This is why the Iranian Regime is attempting to take over the area now and why the Americans and their allies are fighting back.

Blanford wrote: At a junction on the highway, 50 miles north-west of the garrison in the direction of Damascus, a combined force of Syrian troops, Hezbollah fighters, and Iraqi Shiite militiamen are mobilising for a southward thrust to seize the Tanf border crossing. On the Iraqi side of the border, south-east of Tanf, the Hashd ash-Shaabi, an Iran-supported Iraqi Shiite militia sanctioned by Baghdad, is reportedly deploying in readiness to drive ISIS out of Iraqi territory between Tanf and Al-Qaim, another border town 136 miles to the northeast.”

He then explained that the Iranian Regime forces are effectively trapping the US ad allied forces.

He wrote: “And wedged between these two Iranian-backed forces are the US, British, Norwegian, and possibly Jordanian Special Forces, as well as the Syrian militia groups they have helped to train.”

However, it is unlikely that the Regime will win.

Frederic C. Hof, director of the Rafik Hariri Center for the Middle East at the Atlantic Council in Washington, said: “I think any assault on Tanf [by Iranian-backed groups] would meet with a vigorous and effective military response. I do not know the rules of engagement in effect for US ground forces, but an Iranian-Hezbollah assault on Tanf would, I think, be quite reckless and not likely to succeed.”

Blanford also reports that the two sides have already come to blows and the Iranian Regime came out worse for it.

He wrote: “On May 18, US aircraft attacked a convoy of Shiite militiamen speeding south-east along the highway in breach of a deconfliction zone of some 20 miles around Tanf. Several vehicles were destroyed in the air strike and six militants were killed.”

AFP: Foreign ministers of the world's most powerful countries...