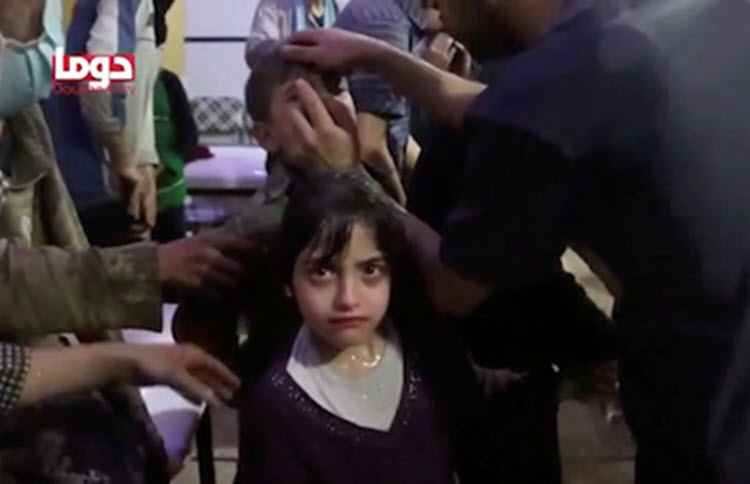 London, 10 Apr – We must not become indifferent to the huge loss of civilian life in Syria, which is currently being perpetrated by Syria, Iran, and Russia. If those responsible are not held to account, then the situation will only get worse and more innocent people will lose their lives.

There have been many attacks on the Syrian people since the start of the war, including many chemical attacks, by the axis of evil who hope to crush the people’s resistance and maintain the rule of Dictator Bashar Assad.

There were four separate attacks in 2013, but the international community did not hold the criminals to account despite strong evidence against the axis powers – notably how Iran describes itself. They even denied that the attacks were chemical at all, which was a clear lie.

To counter this, the Syrian opposition and the United Nations tried to transfer the body of a victim of a sarin gas attack to the US for autopsy and analysis to prove that the forbidden nerve agent had been used. Alas, this was prevented by the Syria and its allies in Iran.

Abdulrahman Al-Rashed, the former general manager of Al Arabiya news channel, wrote on Arab News: “Today the real problem lies neither in the existence of evidence, which does exist and is significant, nor in the criminal systems; it lies in the international community and its institutions, which have been ignoring the situation. The international community’s attitude toward crimes it usually considers as an attack on itself, and a danger to the human race, is quite unusual.”

The fact that Syria, Iran and Russia have been allowed to target civilians in this way without real sanctions from the world, will only encourage more rogue states and militant groups to use them without fear of international condemnation.

There must now be condemnation and sanctions levied against these states for their crimes against humanity in Syria, as well as this group’s attack on civilians in Iran and Russia as well.

Why is Iran involved in Syria?

There are two main reasons why Iran is so heavily invested in Syria and helping to launch chemical attacks on the civilians there.

Iran makes no secret of the fact that it longs to create a Shiite Crescent in the Middle East and it wants Syria to be part of that. This Shiite Crescent would help Iran transfer money, arms, and fighters to it terrorist proxies across the Middle East in order to target Saudi Arabia. It believes that it can turn Syria into a vassal state with Assad in charge if they crush the resistance.

Rashed wrote: “Similar to Syria, Iran is a country ruled by a system that neither cares about sacrificing its citizens, nor hesitates to commit genocide against its enemies. It will not relent in resorting to its chemical weapons supplies to kill thousands of people in wars it is fighting anywhere in the world. The number of conflict zones is increasing, and there seem to be no limits to the means of genocide and mass destruction.”

Iran is also facing massive problems at home, with a population that wants to see regime change and so the government believes that by crushing the revolution in Syria, they will discourage the Iranian uprising. They are wrong. The uprising will win and the people will be free.

Iran’s Role in the Elections in Iraq

Reuters: A U.S. grand jury is probing whether Deutsche...